What is COYOTED? and Why?
Since my Coyote is in public now, I decided to tell a full story in public as well.
It was in December 2008, my friends, couple who reside by the bank of Jefferson River in Three Forks, MT, sent me some hen pheasant feathers as a X'mas present. Partly joke, so I would tie flies for free. Letter said the bird would have been killed by a coyote in their property (but who knows? They are avid hunters). Those feathers looked like shoulders but also aftershaft plumes were included. I felt something. I had to do something with these soft-hackle feathers. I went through a couple of books again and tried find some hints from the soft-hackle master Jack Gartside. Eventually I found cock pheasant ramp feather works the same and are easier to find at local shops than depending on hen pheasant killed by coyotes.

As for the naming, it's a joke about bad American English (or just American English, it is?). I noticed some people use nuns as verbs to make a sentence shorter. "I water the flower" instead of "I give flower some water". "Water" is grammatically correct to be used in both ways but I have heard someone say "I corn cows" instead of "I feed corn to cows". Or sometimes even "I corned (in past tense) cows" to mean "I fed corn to cows". That's very "neck". And this is only one of many phrases I have ever heard, particularly in agriculture industry. So Coyote is not a verb either. But we know how coyotes (animal or people) act and how they are seen in our society.
"Pheasant killed by Coyote" = "COYOTED Pheasant".

My intention of designing was to make it a large bright soft-hackle. I love to swing the large one Madison River within Yellowstone Park during the fall to target large fall-run trout. Coyote serves the purpose. Eventually I found it works anywhere and any time. Besides being a triger fly, it also imitates October Caddis, emerging & drowned stonefly, and even baby trout & minnow.
Since then ORANGE has become my lucky color.
I also thank and give my great respect to some great large soft-hackles that I borrwed idea from. 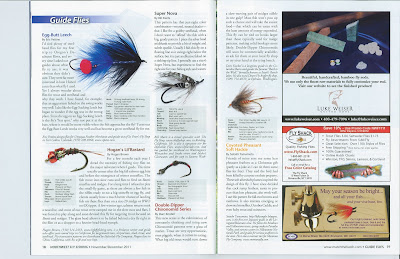