October:
After my last trip in late September, I took off from everything for next two weeks. Working hard as a guide is very physically and mentally demanding. I finally resumed my fishing on 9th at Gardner River within Yellowstone Park. Season shifted into fall. Some large browns were coming up to Gardner from Yellowstone River (of Montana sections) for spawning.
I obtained Winter-Pass at DePuy Spring Creek (www.depuyspringcreek.com) which started on 15th. I fished 12 days within this month!! Lots of large brown trout came into creek for spawning, followed by egg-sucking rainbow. These big individuals were taken by streamer, large soft-hackles, and eggs. 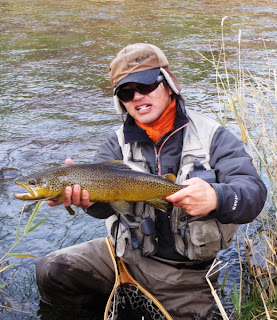 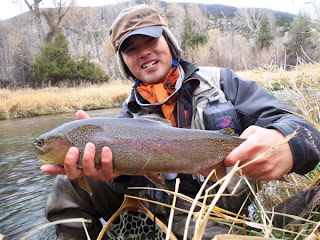 But also some big trout did rise for BWO and Midge hatches. It was way beyond description when multi-pounders rose and took my tiny dry-flies!! 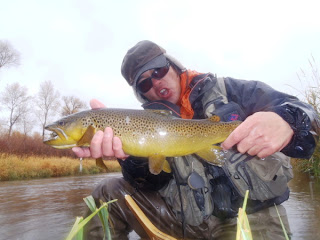 November:
November tends to be the most windy month of the year here in Paradise Valley. This year was no exception. My main fishing was only at DePuy's. Early in the month, when wind was calm, BWO were still hanging in sporadically. It became cold in the middle of the month but when wind was calm, midges were hatching. Trout rose at them.
Big brown trout in spawning mode were anywhere along the creek. One could catch big trout any time with egg patterns. I didn't mind using egg patterns but I trailed experimental designs of mine along with eggs. If my experimental patterns worked, I would be delighted to publish them. If not, egg would catch trout so I would conduct stomach-pump and observed what trout were eating. Winter months are best for experimenting new flies, new methods, and new spots at DePuy's, all of which will translated into next year. Not only at DePuy's, but also experience and knowledge at DePuy's can be applied to any other waters as "spring creek is the classroom of fly-fishing".

Look at all of these bruiser!! 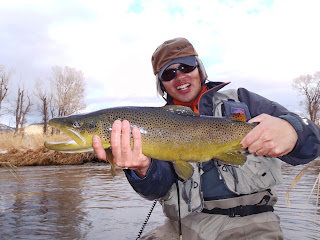 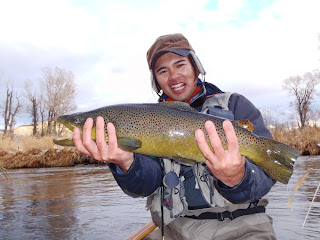 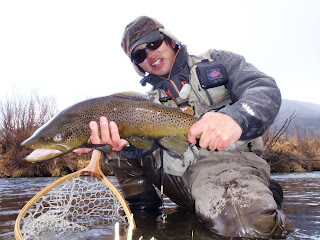 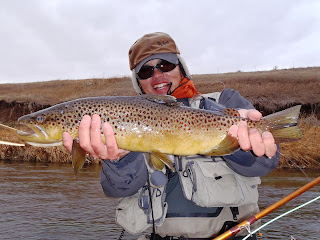 December:
Majority of brown trout wrapped up their mating and head back to Yellowstone River. Aquatic weed beds degenerated in the early part of this month and water level became low. Some rainbows (resident and held-over) were actually mating in upper part of creek. Nice size browns were still found at selected spots. I tried to pick up afternoons with less to no winds. A couple of my outings turned out to be frozen cold yet over all it was very enjoyable. I pursued and enjoyed true "winter midging" in several afternoons. This very last dry-fly fishing of the year is truly a bonus of Winter Pass at DePuy's.


So this is the summary of 2012. Too many memorable fish to post......
Thank all readers from around the globe. I hope 2013 will be another great season for everyone & everywhere!!
Posted by Lefty Angler at 6:54 PM No comments:

Little did I know or plan how many posts I would be writing this year but I made 300th in April and 400th just at the year end. Here's the PART 2 of 2012 summary = highlight of summer guiding.
THANK YOU ALL READERS for hitting my blog!! and THANK YOU ALL ANGLERS & CLIENTS for spending days with me!!
June:
June was more like a "learning &amp; experimenting" month. I could visit DePuy's with my Guide Mentor Tom Travis (Montana's Master Angler). Yellowstone National Park fishing season opened on Memorial Day weekend with limited availability of fishable rivers. Meanwhile, Richard Parks (outfitter and owner of Parks' Fly Shop) took me an overview and review tour of rivers and accesses before guide season really kicked off. Madison, Gibbon, &amp; Firehole Rivers are always good in this early season (and only fishable in YNP). White Miller Caddis hatch at Firehole is worth noting. My brandnew soft-hackle was greatly approved by Firehole's picky trout! Toward the end of the month, I had a cattle breeding job in Kansas. I missed the famous PMD actions at Livingston's spring creeks. Tom filled me in all the information. 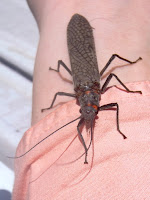 Guide season kicked off!! Yellowstone River was in perfect condition. Salmonfly hatch was great!!, especially from town of Gardiner to above Yankee Jim Canyon. Black Canyon of Yellowstone (within YNP) was even better!! Salmonfly hatch continued till middle of July.
Yellowstone Cutthroat (of course rainbows and browns too) were eager to come up to our large flies. Among YNP waters around us, Gardner was the first for us to guide and fish. Dry fly pursuits with Salmonflies had success in lower section. In upper section, we all enjoyed numerous &amp; eager brookies coming up to our dry-flies. My personal fishing and experiments were done in these two rivers.

I simply didn't have time to get to Lamar, Soda Butte, and Slough (no hearsay here). One thing to note: we had three mud-slides from Lamar/Soda Butte this month. We kept our eyes on "spikes" in USGS website. Although Yellowstone River is big enough to absorb spikes and doesn't get significantly high as in runoffs, water color affects fishing. When we observed slight tinge in the water, fishing literally shut off (even with deep nymph rigs). For float trips, we Parks' guides planned sections ahead of the river. Several trips had to be cancelled when Green-tea (normal color) turned into "chocolate mocha". Yellowstone River and river floats were out of option for a few days. However, right after when it did get cleared, fishing was excellent!! Mud-plugs did revive and reconditioned the river. It was really fun to watch the color gradation as I drove between Livingston and Gardiner.
Just at the end of the month, I could visit DePuy's, just as an angler. It was private and quiet, away from crowds of people and cars. Not to mention, fishing was great. Various insect hatches and dry-fly actions went on till dark...........
August:
The last week of July was hot and the first two weeks of August remained the same. We already noticed algae developing by the end of July, so in August, algae kept flourishing. Slow sections in Paradise Valley (Point of Rocks to Pine Creek) were particularly bad. Hot weather and lower water level caused high water temperature. Around Livingston, it measured 70F or higher in those hot &amp; dry afternoons. Trout habitat changed too. When we tried to fish with nymphs and streamers in order to go deep, we ended up cleaning algae away from our flies every three cast.
After that, at least air cooled down and water temp subsided too. Yellowstone River, especially above Yankee Jim Canyon became wonderful again!! Large attractors and hoppers were ways to go, trailed with small attractor dry or dropper nymphs. For the choice of hopper patterns, I preferred smaller, sizes 14 &amp; 16, and my clients had great success. My reasoning was: trout may be skeptical to all big floating substances since we (trout and anglers) had experienced Salmonfly hatches, then with this skinny water, trout could be wary or shy on big flies too. I also observed trout chose to stay in any riffly spots rather than traditional bank spots. Toward the end of the month, I started to observe small gray/olive mayfly hatching (kind of BWO) at certain spots on Yellowstone River. Also ants became very very important once hopper-bites seemed slow, till all the way into September. Lamar and Slough were in prime fishing = very crowded. Madison, Gibbon, &amp; Firehole were closed for fishing due to high water temp all through in August. It was easy to guess (and I bet I'm right) that the closure must have directed visiting anglers to Lamar and Slough from West Yellowstone. Also Gallatin (MT and YNP) must have been super popular and crowded. So would have been Madison in MT (Hebgen Lake and below). 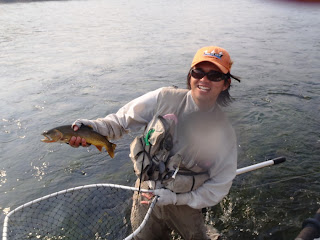 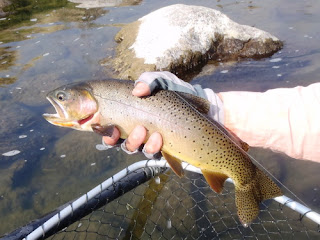 September:
I started to wear my wader since late August. Though water and air were still warm, jumping into waist-deep water and holding my boat became cold. During the first half of the month, Yellowstone was mixed-bag of summer experience and fall expectation. Hopper-dropper or attractor dry-flies still worked. Nymphing became a must when not-much going on. Small streamers (Woolly Bugger variations) were fished in various methods (stripping or under indicators).

Meanwhile, Lamar, Soda Butte, and Slough were offering the finest dry-fly fishing of the season!! Green Drakes, Flying Ants, and midges were main dishes for trout. We had a bit more elbow-room than in August. Trout (Cutty, Bow, or Cutbow), especially large individuals, became wary as by then. But when we did right and trout took our flies, it was very rewarding.

From middle till the end of month, Yellowstone floating was really fun to fish for BWO &amp; Midge hatches. Though most of boats (guides' or regular anglers') started with nymphs right off or stripping streamers all day, my people (clients and friends) and I looked for "pods" of rising trout at certain spots or stretches, stopped my boat, and fished till hatches and rises were over. Before and after, nymphing was a better tactics. Whitefish became aggressive and some were really large!! As we felt the touch of fall, Gardner River started to reporting some aggressive and humongous fall-run browns!! 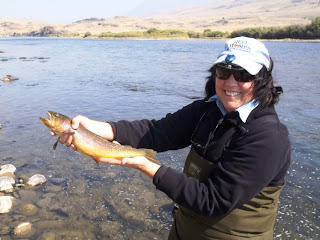 *Stomach Sampling:
Reason I decided to write about this little technique is because of my experience from late August to entire September. In July, right after the season kicked off, trout rose to our dry-flies as long as our flies represented certain insects (Salmonflies, PMD, Hoppers, etc.). Attractor dry-flies were very important such as Chubby Chernobyl, PMX, that sort. However, as August went by, we really had to think about our dry-fly selections. One that had worked yesterday didn't work next. I started to conduct stomach sampling with my stomach pump. I knew I'd better do every time but when fishing and our ideas were going just fine, I neglected. Oftentimes, my guess and information among Parks' guides served right but stomach sampling made sure that I was doing right. The best example was the presence of ants (flying or regular) in the stomach content. Terrestrials don't really hatch in the air or on the water so we need to know and guess right time and spots. Especially ants are hard to see due to their sizes and colors (so are beetles). By pumping stomachs, clients and I made sure we were on right tracks and fished with confidence. Even we had already known hatches and caught fish, in that case, stomach contents let us know what kind of hatching-stages fish were taking. Although I have done and will do stomach sampling every month, I want to position here to highlight its effectiveness to solve our puzzles during challenging periods. 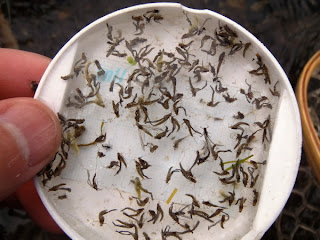 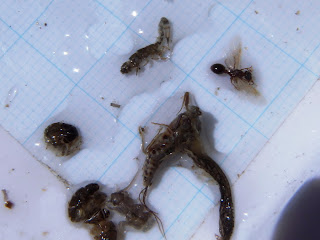 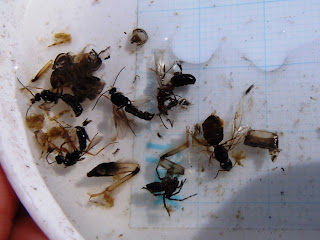