This is the first ever blog post totally & only dedicated to the Atlantic salmon fly. I'd just like to share my struggle with one particular pattern. By doing so, it would explain the insight of what's going on in a dresser's mind and perhaps how & why one can be captivated by and pursue this subject for the rest of his life.

As I've been posting for the past couple years, I've been working on George M. Kelson's illustrated plates as in his own mighty The Salmon Fly. Plate 1 was completed in November 2015. Completed Plate 2 frame and 6 flies inside were shown in two posts before. Plate 3 has also been completed. I have not posted on this blog but it's already shown at my fly catalog, then in other media such as Facebook and Instagram.

Plate 3 contains patterns with their own quirks. I'd say Durham Ranger and Benchill would be straight-forward and familiar in general way. Then rest of 4 patterns require technicality and interpretation. Uhhhh.........now I really want to go over all the patterns!!
...........To me, The Wilson, which is seemingly a simple pattern, offered me quite a challenge. Why & how? Let me go over from the recipe.

It's very much straight-forward at the beginning. The first challenge may be a heron feather for throat. Heron feather is hard to obtain and own in US so most of the time modern dressers use a sort of alternative. In my case, it's not always perfect or look-alike, I dyed and used a turkey marabou (oftentimes used as an Eagle substitute, which also hard to obtain and own in US). Looking back these pictures, I like my choice and what I did.

Then came next the hugest challenge to interpret: wing and materials...........
I have light-colored Bustard and speckled turkey, both of which are easy to incorporate in married wings. Egyptian Goose feathers seem obtainable (Google it!) but which part? In Essential Kelson, Marvin Nolte annotates: "Kelson offers no advice as to which feather from an Egyptian Goose is preferred. The wings and tail of this bird are not especially striking, while the barred body feathers definitely are. Whole flank feathers as an under-wing are possibility". The illustration "might" indicate so too.............OK...............as for the feather, Egyptian Goose flank feather is very similar to Pintail, Teal, or Gadwall, which I have plenty. I decided to use a pair of Pintail as whole-feather (actually slightly modified to fit under the married wing). For grey Mallard, I can use Mallard flank that we often use trout streamers or as tail fibers of nymphs.

So I set the modified pair of Pintail (some struggles here but I made it). Then I was going to marry rest of feathers. I applied "Rule of 24" as I always do: try to keep the number of barbs of married wings at 24 (of course some exceptions apply). I got ready 8 barbs of Turkey and Bustard. For the duck feathers, rather than actual number of barbs, I cut out a strip in the same width with the stem (rachis) attached.  Then here's when a big HOWEVER happened. Mallard flank doesn't show well on & against the Pintail under-wing (or, I'm sure, even when Egyptian Goose is actually used) UNLESS the strip is married above Turkey and Bustard. However, there is no such long barbs. I didn't consider marrying in and among Turkey and Bustard as marrying and mounting would be nearly impossible. So, I decided to substitute grey mallard with Bronze Mallard, which is much darker and shows well over Pintail. So I cut out the Bronze Mallard in about 8 barbs width and married with the others. Any married wings incorporating any duck feathers are very challenging to keep them married and mount, but with experience, it can be done.
I completed the rest and here it is. I think it was OK and acceptable. However I somehow had this nagging feeling. I could have done better............sorta. Couldn't I use grey Mallard? Also it may not be able to spot or tell in the picture but Throat-Wing-Head transition wasn't smooth............Also the topping is not quite my liking (sticking up........)
After I completed Durham Ranger, the last one of 6, I decided to rework on The Wilson. I carefully peeled off head coating, found the thread, then started unwrapping one at a time. I undid the wings and I even had to redo throat as well. I used a pair of Pintail again, this time slightly longer than before. Then this time, I decide to use grey Mallard as Roof😏 Why not? Roof is a part of the wing and sometimes it's not clearly mentioned in the recipe (in classic literature, when it's specified, it's said "cap" or "capped by Bronze Mallard"). I knew I can do this! So I assembled 12 barbs of each Turkey and Bustard = total 24 barbs and married in kind. Mounting was much easier. Then I set a matched strip of grey Mallard as Roof = set above and along the curve of main wing. Rest of materials were attached. I was satisfied with the topping this time and so with the head👏😉 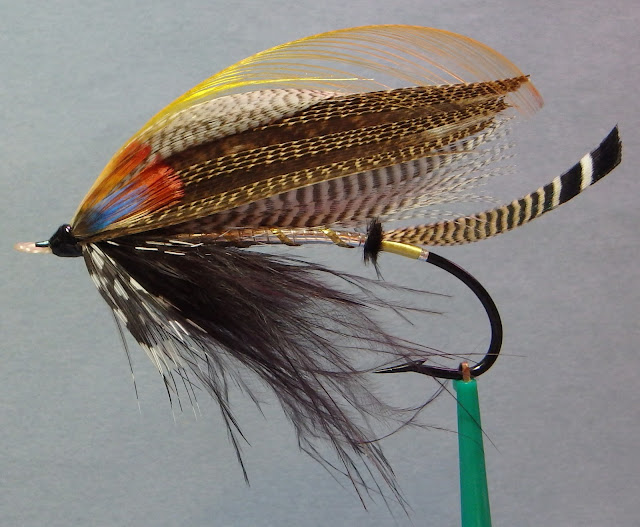 So this is how I interpreted and completed The Wilson.
Reading this through, some of readers may wonder why I mention interpretation so often. Or why just tying flies requires interpretation. Atlantic salmon flies we know now are based on written literature. Not many flies or not every pattern exist for us to see and examine. Of course there are some set rules to complete these complicated flies. It's not the result of something at random. So, in terms of art, it's not a random junk art with one's own radical ideas. Techniques and disciplines can be learned only through practices after practices. However there is NO set rules for certain aspects or even mentioned/explained in literature. For example, in married wings, there is no clear or set rule for which color/feather goes above or below. Certainly, did our ancestors make such complicated married designs? Furthermore, why the same pattern is varied by each author and is with different materials (plus or minus) and style?

In modern days, when we say or think about one fly (trout, steelhead, modern Atlantic salmon, whatever), majority of fly anglers and tyers have one common image of that pattern, tied in the same color, with same materials. Although I can't inspect each pattern's history and origin and state here, those patterns have been exposed to and among more people and more media (books, magazine, eventually internet) than Atlantic salmon flies. Atlantic salmon flies have such a brief history and only a very short period = late 19th to early 20th century = is known to be the Colorful Era or the Golden Age. They were primarily tied, used, and published in and among British Isles, furthermore, only among salmon fly-fishers of which numbers must have been much less than now. Though this is just our speculation, either Jock Scott, Green Highlander, Doctors, etc............one author and/or his friends/correspondences might have written up their own variation...............

Speaking of speculation, when we deal with this kind of "near lost" subject, we tend to speculate some to lots. Back in days, have they really made such colorful and elaborated married wings like we do for framing purpose? I doubt it........... This is apparently our own methods in modern days, and each dresser does differently and uniquely. The list of this kind of questions goes on.......... Have they used a strip of Wood Duck or a tip of entire feather? Have they married Parrot and Ibis feathers for wings? Were there such long barbs? How big were flies actually? Etc., etc., etc.,..............

Only by keeping working on and practicing salmon flies, one will encounter these aspects and questions. Then only by keeping doing so, one can come up with interpretation - I don't use "answers" as there may not be!! Of course by then he must be developing some confidence in his technique and products. Someone who have lots of experience can teach and explain. I might have pestered my mentor at this transitional period. I can't thank him enough.

On top of these, we in modern days are doing this as and calling "art". Now the subject and discussion become more complicated!!

However there are a few things I'm sure of. First I'm sure these are not derived from my ego or not because I'm full of myself. I believe there are some set rules (techniques and theories) that are common and need to be learned to complete Atlantic salmon flies. On top of these fundamentals, NOT "under" as it sounds limited, one can develop his/her favorites and styles. Then once one develops into such stage, recognize and accept other people's. Good or bad? Pretty or ugly?  Rather than criticizing and hurting each other among fly-tyers, critique your own flies first! Then I think it may be better to show people who don't tie and their opinions and views!!

By working on and completing The Wilson, these thoughts and memories kept flushing in my head so I had to write up.