Another nice day in our area. So was yesterday, so I thought today would be a good day to get out and I'd better as cold weathers are predicted for next 10 days or so. With a great imagination, I went to Lower Madison as two weeks ago. But this time, I was well-prepared mentally and physically. I was going to make a hike along Bear Trap Canyon Trail with a lunch in the backpack. Most of ice along the shore was gone, which had been 3 feet or more two weeks ago.

The more I visit Lower Madison, the more I'm attracted to its unique characters. It's different from but also similar to upper section every now and then. There are this kind of "rock gardens" here and there. Then long riffles and glides of flatter waters come next. BTW, it's not sunrise. I ended up fishing till almost sunset. 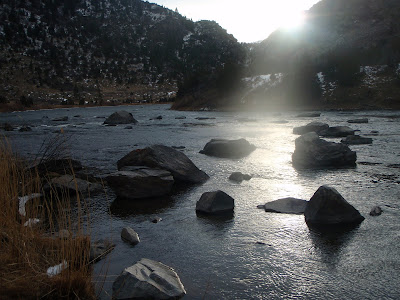 Well, all above said, I didn't have any hot actions at all. Today, I covered all the good looking spots with nymphs. I usually fish very fast but thoroughly also. And I have confidence in my fly selection and assembling as well as in my water reading. Probably around 1pm, finally my bobber sank like being tugged. This little rainbow bit on a large Rubber Leg stonefly nymph. And this became the first trout for 2011. What a joke?, I thought. But now when I look back this little 'bow, I like its dark spots are vivid on top fins and tail, then body spots seem developing colors for now. It's indeed a native trout in Madison. I take it!! 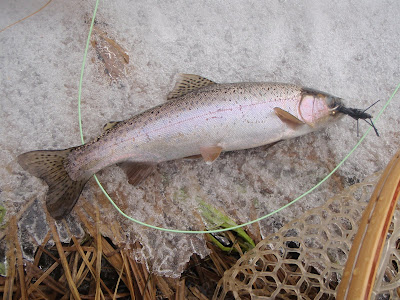 I started fishing just at 10am as I planned. I was going to finish around 3pm as those hours would be the warmest hours of the day = fish would act more. But I came back to my truck about 5pm. With that, I covered only 2.5 miles upstream. 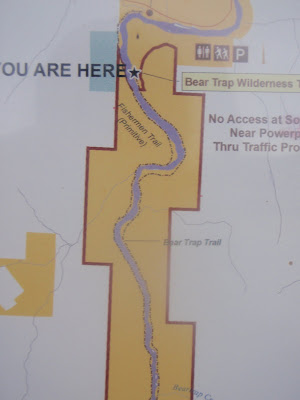 From Ennis Dam, this 10-mile section is referred as "too dangerous to oar" (except for highly experienced hands) and now I found "too long to cover on foot". It's hard to tell how far I walk on trails in mountains, not like walking blocks in town.

Lower Madison is known to hold more large trout than upper sections (entire trout population may be less instead, depending on sources) as I caught a 19-inch rainbow last October. Furthermore, this Bear Trap stretch is the best bet, I hear.

Did I misunderstand anything wrong? Did I read water wrong? Was my fly selection wrong? Or was I in a poor stretch? Or something going on with trout? Or just the season? I don't think I can figure out by only one or two more visits. Probably the simplest action is to go toward Ennis and fish the stretch below the dam.

Anyway, it was quite a day for me. I didn't expect I would be doing this long hiking & fishing from January!! Then again, I take a cute 10-incher in my book. Slow start seems always good because I usually catch larger fish as the season matures. So was 2010.

Hope everyone is catching your first trout for 2011!!

Posted by Lefty Angler & Flies at 9:10 PM No comments:

Winter days go on.............. After the brief warm spell, it snowed some. Not really cold or dangerous or I don't feel bored staying inside as I have several things to do. But as for fishing I have to feel stuck and patient. Yellowstone River in the area seems frozen oftentimes. Gallatin and Lower Madison are mixed results, I hear. It just doesn't sound worth for me to drive all the way as I made sure my body and fishing sense are in shape last week at least. Not really desperate to catch the first fish for the year either. It will come soon as February is just around the corner.

Last year this time, I recall I practiced MPR (Micro Practice Rod) a lot in the backyard where I lived in eastern WA. Now in Livingston, I don't have a backyard but I have enough space outside to use MPR, but too windy to stand....... I have some space inside so I kind of cast just to scratch my itches. I caught imaginary Cutty while dreaming its rise on a hot summer day....
Remember my Velcro devise? 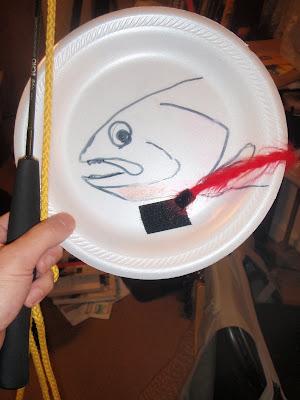 I have found a cozy & friendly used book store in Bozeman (you know used book stores are oftentimes friendly but they are not cozy and neat all the time......). These three are today's loot. They should keep me busy and might help me be smarter. Oh, but don't forget catalogues for 2011 from shops!! 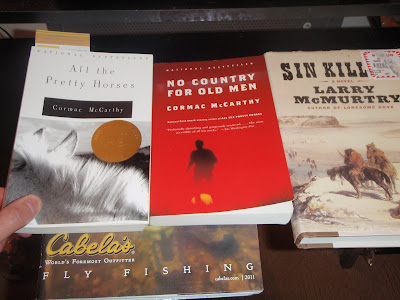 As for fly tying, I haven't been sitting at my bench for a while now. I think I tied enough just for my own (myself and guiding days). But considering kind & positive reviews from people whom I gave away or sold my flies, I am thinking to start a sales blog soon. I have to make sure that nobody is going to sue me when I tie and sell somebody's patterns.

Posted by Lefty Angler & Flies at 9:59 PM No comments:

Today, as I woke up late in the morning, I first felt warm (upper 40s is considered spring in Livingston!!) and didn't hear any winds galing. I suddenly decided to get out fishing for the first time in 2011. I figured there would be lots of people along Yellowstone River around town as I was late and it's Friday today. Then I thought Lower Madison can be good too as I wanted to drop by fly shops in Bozeman. Besides I was slow and late to get to the river, I noticed it wasn't only me that felt warm today. There were crowds of people on Highway side banks. But crossing to Bear Trap Canyon, I saw only 3 cars and 1 boat floating nearby. Good guess!!, I thought. Probably fishing with nymphs very slowly would have been a better bet but
Since I finally got ready around 2pm and now wind started from up- to down-stream, I decided to fish down quickly and thoroughly with streamers.
These were today's "junks" thrown into Lower Madison.... 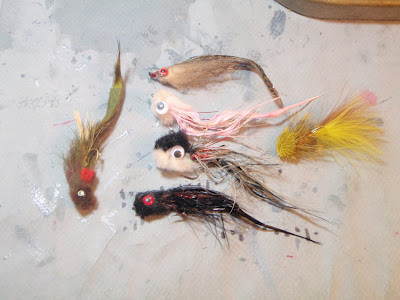 Since it was a sudden decision, I brought reasonable amount of expectation rather than Happy First Fishing Day!! I gathered up flies quickly in the morning, which I usually do the night before when I really plan to go.

But also (I'm not making this up), my biggest objective was to check the shape and condition of my body by casting and wading. Not because last time I fished was early November when the Park closed but because I'm having very inconsistent and lazy day to day schedule in my semi-retirement life. I was afraid if I lost some muscle and sense of fishing. Once I started to breath fresh mountain air, I felt great. In spite of wind and standing in the water, I started to sweat. Going up & down steep hills, stepping on ice, and then wading, my body worked very well. Recently I do some stretch exercise while reading on the floor. Clever, huh? Then I could read water fairly well and started casting like bringing food up to my mouth.

Next time, I plan well wherever I choose to go. It's really no big deal that I didn't catch anything today, as I live in this greater area so I can get out any time I want!!

Happy fishing, every one!!

Posted by Lefty Angler & Flies at 9:27 PM No comments:

I have been with myopia since a lower teen. Mostly because I studied very hard!! and then too much Nintendo, I guess....... Anyway I have to wear contact lenses when I go outside and this prevents me for serious backpacking and camping and fly-fishing to mountains. I have to be within the vicinity of my truck in which I stock water to wash my hands before I take off my contact lenses. But then again, though I would enjoy solitude and quiet camp night, I am not much interested in 3-inch Brookie in high mountain lakes or Golden Trout secluded somewhere in Sierra.

I just dropped by an eye care clinic here in Livingston and got a new prescription. And I found it's been really funny. Since I started to tie flies and read lots of books for the last several years, my eyes need less correction every year, i.e., slightly improved so to speak. I think it's really funny because as I concentrate and focus for each fly I tie, I notice myself I am getting pickier as I tie more and more, which sounds like more strains on my eyes. Probably just spending on computers is not bad either as long as I'm not typing for my Masters' thesis or anything serious. This does not make me out of the list of potential LAZIK candidates though...... 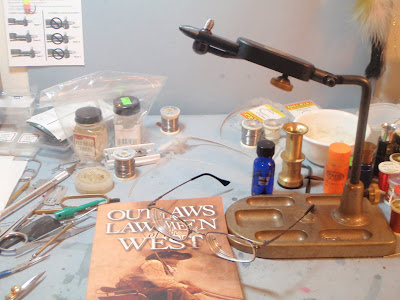 Indeed right after I got a new pair of contact lenses as a trial, they fit very well. Instead my old glass started to hurt my eyes. Just yesterday, I received a pair of glasses based on the new prescription. It's far lighter and righter for my eyes!!

I might even get a pair of FITOVERS for this new pair of glasses if I really plan to make backpacking camps over a few nights somewhere in Montana wilderness.

Posted by Lefty Angler & Flies at 8:56 PM No comments:

Happy New Year!!
Here in Livingston, we are experiencing cold temperature, snow, and not to mention winds. Not as bad as Thanksgiving Day though. Though spring creeks are available to fish all the time, probably my first day out fishing would be a bit later this year. I have completed several dozens of tying order for a fly-shop in town (yes only one.....C'mon American shops, why you depend on Pakistan or Sri Lankan flies when a handy guy lives right here!!) and my friend Chris contributed me cash by buying up lots of my flies (Thanks, Chris!!) so I am back to my bench to fill my boxes again. I noticed my scissors was getting dull and needed to replace it. I think I can say typical pairs of scissors, $13 - 15 range, last for about a year for my amount of tying. Of course I was looking the similar kind. But at this time of the year, fly-shops seem to carry less items as they just clean up their inventories of the previous year. I didn't see any typical/average pairs of scissors. But then again, not due to that, I was somehow attracted to the one of which price was double!! It was a Razor Scissors from Dr. Slick in Belgrade, MT. It cost as much as my weekly grocery bill...... Anyway it is indeed razor-sharp. In case you haven't seen this, one can adjust the tension by the dial (or nut) in the middle. I have tied up several of my favorite large soft-hackles. 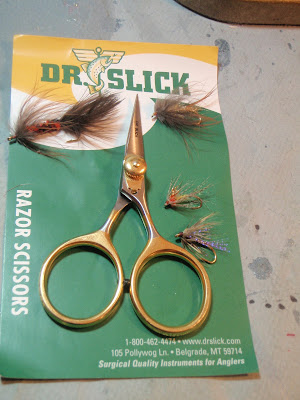 I came to be attached to this scissors immediately. I started to pay some respect to this inorganic and lifeless product. I also felt some responsibility to be qualified to use the best of it as I do to my Regal vise, that I go to the grave with. 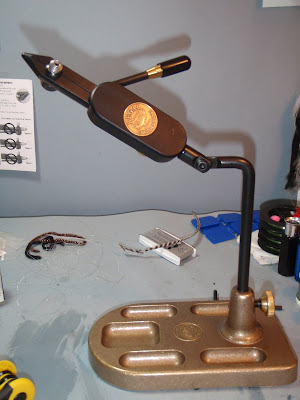 Hopefully I can get out soon and do the first fishing for 2011. But I don't mind idling in my house by reading books and tying flies some more.

Probably I'd better clean and dress my lines first. As I moved to Montana and fished its clean waters since last October, I haven't been washing or dressing my lines since......
Posted by Lefty Angler & Flies at 10:07 PM No comments: