2012 marked one of the best fishing years in my life. I have fished 12 months of the year around Livingston, MT and Yellowstone National Park. I have grown up better and more savvied as a fisherman and a guide. Purpose of this report is: fishing condition, trout behavior, hot flies, insects activities, river condition, tactics, and miscellaneous notes from my journal. Pardon me that I do have to include some glorious pictures of huge trout and our "grips-&amp;-grins".

Basic Highlight: Winter of 2011 to 2012 was very mild for Montana standard. We just wanted an "average" winter after historical snow accumulation and high water caused by the last winter (that's the story and experience from 2011......). Indeed we had average winter and average river-flows. Was fishing average then? To answer that we have to define "average" for each river, angler, month, the way to fish, etc., etc................ Anyway, one note worth emphasizing is that we experienced hot, dry, drought, and smokey weather in the last week of July and and first two weeks of August = 3 weeks give or take. That did affect fishing situation on Yellowstone River for the rest of the year. 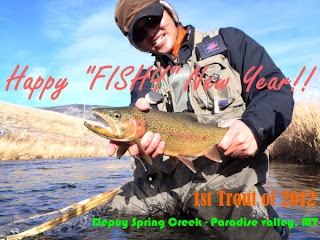 January & February:
I had a Winter-Pass for DePuy's from October 2011, so I enjoyed "Fishing Holidays" for Thanksgiving, Christmas, and New Year. On January 2nd, I observed rainbows in DePuy's (resident or held-over from last fall) were making redds and pairing up. I also kept my eyes on Yellowstone River just around town all through winter for midge hatches and rising trout. On January 13th (not violently windy day), I observed exactly both at a section just below DePuy's. As I visited Parks' Fly Shop in Gardiner for the coming guide season, I fished the confluence of Gardner and Yellowstone Rivers (which is Montana territory) and I experienced the same (midge hatches and rising trout). As for DePuy's, somehow I didn't encounter any midge hatches. Streamer and egg bites were pretty much off as large browns that came up to spawn and rainbows that chased eggs and instincts seemed to go back to the river. I still caught trout consistently by nymph rig (scud, larva, &amp; worm). Overall it was fun and blessing that I could get out fishing in the middle of winter. 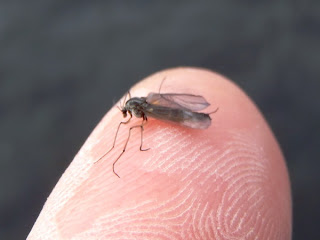 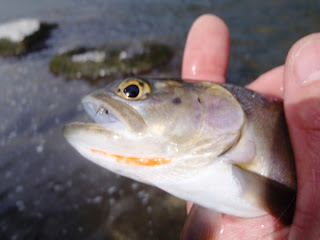 March:
My main outings were still at DePuy's. I started to observe lots of large rainbows, followed by browns, coming into the creek for spawning. Under warm and dry weather, water was low = oftentimes eye-to-eye with trout. It was simply amazing to observe this annual rite of spawning by just sitting on the bank (NO fishing!! Leave them alone!!). I did pursue and enjoy some large &amp; aggressive rainbows, either before or after spawning, not at redds. Also I didn't hesitate to warn and pick on anglers who were actually stepping on redds in spite of "Closed Area".
Also I started to float Yellowstone River. When I conducted, wind was very brutal........Though tried mix of streamers, nymphing, and midge dry-flies, it wasn't fruitful....... 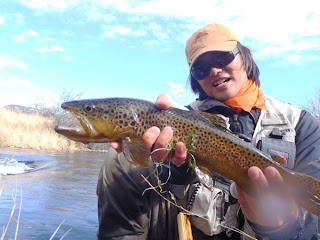 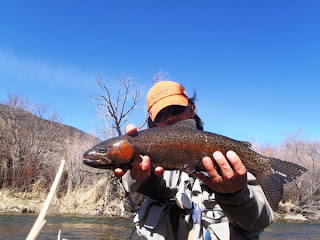 April and May:
I kept enjoying at DePuy's and made over 50 days!! This achievement was indeed the fundamental of my successful fishing &amp; guiding of this year. Toward the end of the pass, I finally enjoyed consistent hatches (the first ones of the season) of midges and caddis. Not Spring BWO we would think of!! Although windy conditions around Livingston made tough and unpleasant to float Yellowstone River, I had some good dry-fly fishing with BWO on right days. Toward the end of April, weather did warm up. It was welcome to expect Mother's Day Caddis hatches but a bit too warm. Runoff did start which made locals know we had to wait for two months, give or take. HOWEVER!! at the very end of April, weather shifted back to winter-mode again. Cold weather must have frozen up snow-melts all around Yellowstone so consequently river dropped and became clear again. I had great fishing during the first few days of May. Mother's Day Caddis weren't washed away. Then with this cold condition, BWO came up again!! Furthermore, March Brown Mayfly popped a lot enough for trout interests. So trout decided to love my dry-flies!!  Finally on May 10th, weather got warm again and annual run-off really kicked in............. 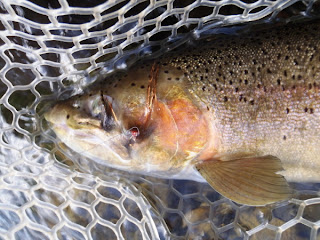