I was sincerely happy that my lovely companion caught a super nice Yellowstone Cutthroat last week at Yellowstone River below Lake. I took it as mine too. Exactly a week passed. "How are those big ones doing?" "How is the River flowing now?" "How the hatch may be"................

Anything in life has cycle and/or season. There are so many seasonal effects and considerations about fly-fishing around here. One year, I may hit it right and have great time. Then in another year, I would miss the event or wouldn't do well during particular situations and I would dwell on it or think of solution till the next opportunity comes (sometimes it doesn't happen in the next year, I may have to wait for a few more years). Or if I accumulate experiences for certain situations and conditions of the year for several seasons, those are deeply notched in my memory system. I still fish for it then observe and learn but also I'd be relaxed.

To me, this particular group of Cutthroat in this particular stretch is the most iconic and truly a once-a-year event that may last only a short period among all the seasonal fly-fishing events around here. Certainly the size of trout is captivating (if I get lucky!). But also all the surrounding, history, legacy, everything involved is so special. I launched a Dawn Treader mission again. This time it was a solo excursion.

I got there way before the dawn. The Sun had been behind hills and tall trees then finally popped out. 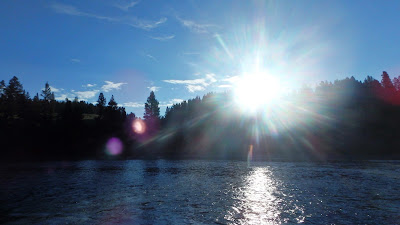 Would I catch them by accident by prospecting? Perhaps then not really😑
Brown trout is said to have individual personality. Cutthroat in this region have one universal common trait: they don't respond to our flies until something triggers them. It could be time of the day, amount of sunlight, weather in general, insect hatch............... Oftentimes we, especially visiting anglers, have to feel they may not exist................. "Have they gone back to the Lake already?". Instead land creatures (group of elk) came and greeted me in the distance. 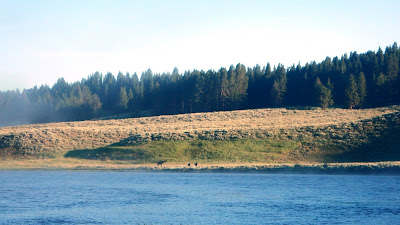 The sun seemed to decide to shine. Number of insects in the air seemed to increase one by one.
Finally at around 11AM (so guess how long I was meditating in the middle of the river), I started to see several doable rises. They were feeding on insects.  One big shadow seemed to swing under my dry-fly. Was I off😴? Or did I see an illusion?
I covered the area patiently and thoroughly. Suddenly one big submarine appeared. This time I was fully awake and sure that I wasn't seeing the illusion. It came up on my Green Drake dry-fly. I set the hook and made a connection.
Heavy😬❗❗ just as Renee was struggling a week ago. I carefully yet confidently netted😌

I was rewarded and snapped several pictures. But I knew there were more hatches and rises going on, that I wouldn't know how long they would last. If I would come back in three days, would I experience the same? - may be then may be not. Or I may not experience this until next July............. Rise forms & sounds told me they were after caddis. I was sure one came up to take my caddis dry-fly but I responded lightning-fast and pulled the fly out of the mouth😖 - this does happen to anyone who fish for Cutts around here.
Next scene = my vision I wouldn't forget the rest of my life. In that huge green pool, I could see several huge dark shadows swimming and feeding😲. I cast to one and the dark shadow took my caddis dry-fly. This time it was stronger, putting lots of fights and bends on my brandnew fiberglass rod. I was again able to net and snap pictures.

I hooked one more but at the last moment it opened the gap of caddis dry-fly and swam away. Then I ended up pulling out my dry-fly out of several mouths for the next hour or so................

What a banner day🎉🎊😎🙌
I hate to judge and entice others by the size of fish however all the trout I netted, hooked, or missed were 20+ inches - some of very rare situations in North America.

I feel very rewarded and satisfied and I'd even like to say to them "see ya next year🙋👋". I could even say I've done enough for my own satisfaction for the season = now help others catch more fish for the rest of season!!  If anyone is up for this challenge, there are still some chances & periods left for the season.