Another Fly-Fishing Saga Somewhere in Montana

Montana is arguably one of the best trout fly-fishing destinations in the world, filled with Native Cutthroat, elusive & enormous Brown, and acrobatic & athletic Rainbow. If we consider Brook, Lake, Bull, stocked Golden, and even Whitefish, our list of destinations will be a life-long pursuit.
However, have you - either resident or visitor - considered other species could be caught on flies in Montana? It could be somewhat what locals would be involved. Or perhaps, just like anglers from areas that don't have many trout fisheries would love to come to Montana, some Montanans may seek some other species other than trout while still in Montana. That does not mean those Montanans get tired of trout fishing. I, for one, have so many trout waters that I haven't fished but I want to someday and I always look for next memorable trout from waters I fish in regular basis. In my case, it's to push the envelope and open my own horizon and experience.

My lovely companion and I hit one such destination. It was also a debut day of my brandnew Echo Dry 6wt, Redington Rise reel, and RIO Grand line, while being protected by Patagonia Rio Gallegos wader.
We had one objective though we had no idea what to expect. I rigged up a likely fly and kept fishing. I got the first unexpected hook-up that got off before showing itself but I felt the take was different from trout. Next time, I was a bit more careful. This is the memorable first fish on my brandnew 6wt rig😁🎉 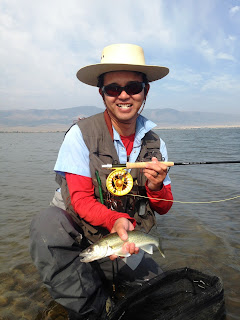 Then the second one to be landed. These are Walleye😮.

What a toothy creature 😨 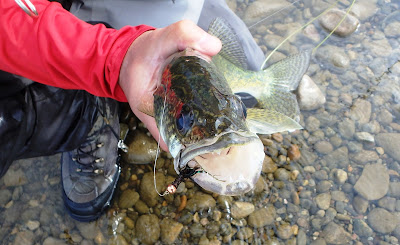 This second one was larger than the first one and put some bends on my 6wt rod. 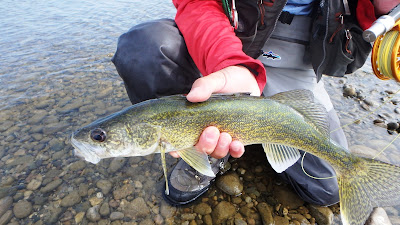 Then we started to see what we wanted to see. This was the objective that we were there. These beasts are as elusive and tricky as trout. Fly-fishing for them is as technical as for trout.
After some trials and errors, I adjusted myself. I finally made a hook-up. Yes👍❗❗however the moment after I was slightly scared as, though I have known already, these beasts are much heavier and hard-fighters than trout😨😲. I barely brought it to the shallow😥 and with the help of Renee we captured the beast😲 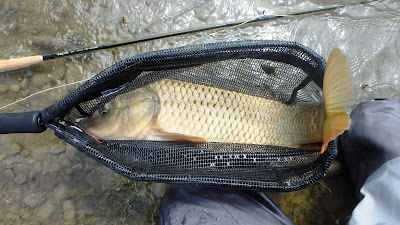 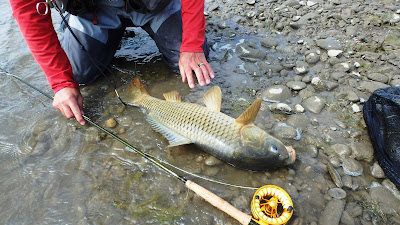 This is my second largest fish caught in freshwater (top being the King/Chinook).
Certainly it exceeds any other trout species I've ever caught. 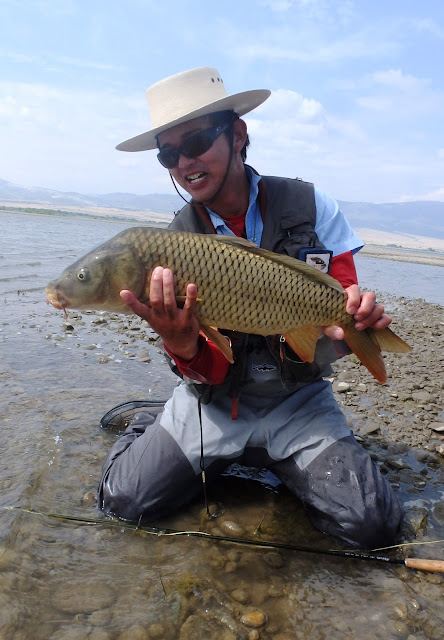 I have a special spot for carp. Indeed that's the first species I fished regularly as I started fly-fishing (that itself is the long story). In Montana, this is quite a change from "trout game". I don't say "different" as it's indeed as technical as trout fishing and requires "fish savvy" even just to get close. Never underestimate...................... one will definitely feel the same frustration as facing the selectively feeding trout on spring creeks.
If you - resident or visitor - want to do something new, "carping" may be the one😏
Posted by Lefty Angler at 5:36 PM