Though I often visit Montana to fish some of the best rivers on the earth, I do have some waters to fish here in eastern WA. Well, actually never equal to the qualities of Montana rivers, yet likable and OK. There are lots of lakes to fish here in eastern WA, but I don't like to fish in lakes. Though I understand trout can grow much larger than those in streams, lake fishing is slow for me and I am not a great fan of float-tubes. What if there's a freshwater crocodile or a shark in that lake? There might be some enormous trout or carp that can gulp your feet!! These are my belief and respect of the water, and that's my problem about fly-fishing in eastern WA.
Rocky Ford Creek in Ephrata, WA can offer some trout fishing on foot. But then again, but.......
Put it simply, I go there twice a year only when I need to feel some big trout without going to Montana, and that's enough.
Here are a few things that I don't enjoy. First of all it's open year around, so it's everybody's place = lots of people from the Coast to Idaho. I don't mind that because I can handle the same situation at Montana rivers (Madison, Firehole, etc). But I have to see some problematic people such as; who leave their garbage bags at a camp site, who don't really fish but talk loud and their dogs are barking loud and running around, who are illegally wading (wading is not allowed and very dangerous in this muggy and muddy bottom) and sending waves to other anglers, etc.
Second, it's called a creek but it's basically a huge pond. A bit too slow to trigger me and make me keen and do the best presentation for dry flies or swinging soft-hackles.
Third oftentimes, all you need is scud......Here's my own Deer-hair Scud with an orange hot-point. I am embarrased to show but this has caught too many trout here. 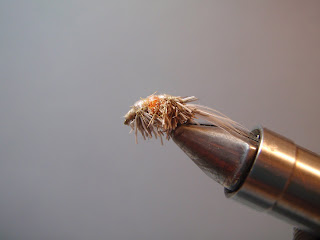 But I don't want to get sulked or be pestimistic at my blog! Here are some good things about Rocky Ford. And these are the reason to make me go......twice a year.
First, these are stocked Triploids. the smallest I caught is 16-incher yet weighing 2-pound, fed by all these scud, leeches, and even mud.
Second, I have figured out the way to avoid the crowd; to start way earlier even than campers.
Third, by doing that, I can do some stalking and bow-&-arrow castings to the crusing trout by the banks. Very up-close and personal.
And forth, if there are lots of people around me, I will get lots of attention from them as an audience when I hook trout, especially when trout are jumping around!!
Also what I have found is to check the opening days of lakes in the area; that way lots of people go those lakes and Rocky ford can be empty!! Trust me!!
This is the obvious (and easiest) spot, where the creek narrows and makes the deepest chutes along with rocks from both sides. It's about just below from the parking/camping site. When I really need to feel fish, I keep this spot at uhhhhhh........5:30am after 2 hours driving!! 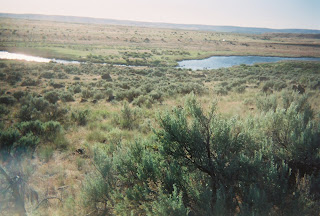 Whatsoever, this is the biggest trout I ever caught. I really did not measure but considering what the picture says, it was difinetely 25-inch long and above 5-lb. I was really scared to net it bacause it was so huge and heavy. 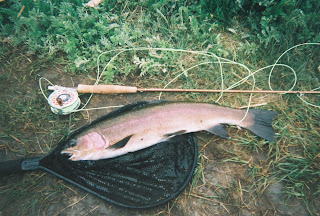 Then these two were some of the huge "hogs" from Rocky Ford. Please note, I hooked and landed them with my Sage 4-wt!! 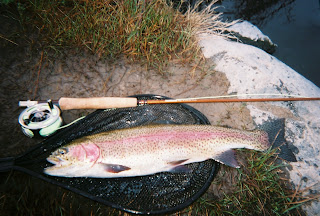 Especially this fatty, I hooked this probably 5-ft away from me while it was crusing the bank and I was hiding behind the little bush. The fly was the scud above. The bite and hook-set were so vivid that I can't explain in words.... 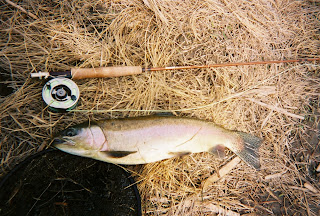 Oh, yes, Sparkle Scud was in the middle of upper jaw. This was a slightly technical for me at here. I swam my fly behind the rock then the Thingamabobber let me know the take.....well, how technical it is.....?? 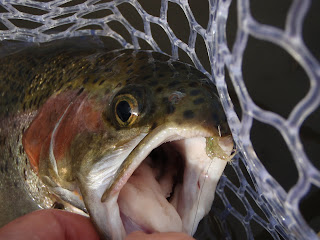 Finally but not the last (hoping for more to come!!), catching this one set me into some upper-levels of fly-fishing and made me feel what I have been learning (from books and experience) are correct. There is an outlet from the hatchery (who manages this public section also) and that is the only one riffle. I saw lots of midges were hatching and trout were taking under the surface of that little and only riffle. And nobody was paying any attention to that.

I swung my own tied midge patterns that I learned from Sylvester Nemes' books = "THE" soft-hackle guru. This tiny #20 midge larva/pupa on 6X tippet landed this 18-incher that weighed 3.5-lb (I was sure because on the way home I dropped by a Safeway and felt and made sure with a pack of ground beef!).

Again, there were several people around me and the trout jumped a few times. I never meant to but I had to show them off my fish-handling and landing.....Happy! 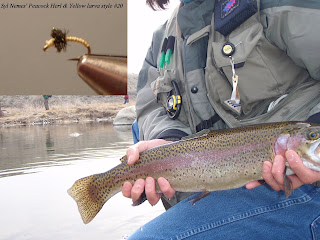 I am thinking to visit Rocky Ford for the second time of this year, which will be before I visit Yellowstone in late Octber. Just to feel some big fish.

Rocky Ford can be lovable/hatable for anyone but as long as one can get along with what's going on, it can be an OK place to visit every now and then.
After all, though it would only a few, what's wrong with catching big hogs in front of other anglers??
Posted by Lefty Angler & Flies at 11:15 PM