I just came back from another trip to Yellowstone.
Put it simply, it was a tough fishing. But that was what I wanted to see. Insect hatches were waning as summer goes by. Terrestrial fishing can be good but when everyone is using them, especially big hopper imitation, trout can be suspicious as days go by. And to see what I can do during the transitional period.......Was I mad and frustrated? Not really. I had my own expectation and objectives.
Also, here's a personal note. I think it is good that I am gaining confidence and knowledge to fish Yellowstone area. But also I knew my nose and attitude were a bit like Pinocchio's. So far every time I have made a trip, I catch fish. Lots of them. But this time my Pinocchio's nose got shortened as the day went by, instead I got a mosquit bite or acne on top of my nose......
But!! before talking about fishing, I have to mention some incidents that I didn't enjoy.....
First, when I left my house at 10pm Friday (Aug 28), it was around 80F. I started AC of my F-150 (aka Big-Fella) but I was not getting cool breezes, which had been ice-cold within a few minutes. I know his sounds, smells, actions, etc since we've been together for a long time. I noticed all of those were normal and so were the gages. So I kept driving up to Ennis and West Yellowstone. I was hoping there were some auto shops to talk to along the way but they were closed for the weekend. I asked some advice to people at a NAPA shop in West Yellowstone. They said fluorine was getting low or out yet it should not affect the rest of the system nor put me on the side, just I would not have cool airs. That was what I thought too since Big-Fella is now over 211K miles. As I drove and fished the Madison to West Yellowstone, my mind was sporadic due to this. Next day was Sunday (I had to fish anyway) and on Monday I would be floating with a guide. I couldn't talk to people at auto-shops till Tuesday morning. They said the same thing that I can fish and go home, just no cool breezes. Anyway I am home now. 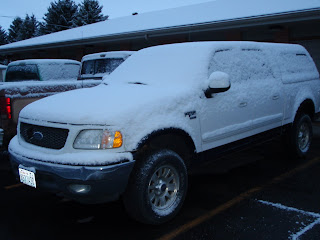 (Big-Fella covered by snow in "late April" during Livingston trip this year.)

Second, on Monday morning (Aug 31), I was way late to wake up. I was not late to meet a guide at Blue Ribbon Flies or had him wait, but I could not have my own slow and easy morning to get ready for fishing. I forgot to set up the alarm on my cell phone. I barely woke up for the sunshine at 7:15am. When I know I will have a long day for fishing or breeding cows, I have to eat a big breakfast. 3 to 4 eggs with ham and toasts. Potatoes, sausages, etc as needed. This way, as the Sun rises, so do my blood pressure and sugar level and I can keep going all day. That morning, I could barely fetch whatever I could pick up, clean-up, and dress-up. This is the one thing I really regret and will never let it happen again.
Third, Monday seemed to turn out the bad weather pin-pointly. We had sun, cloud, shower, and winds every 15 minutes while hearing thunderbolts somewhere. Then after that till today, the area has been sunny up to 90s. This Monday weather seemed to shut off trout's surface activitiy to trrestrials and attrator dries.
Then forth, my polarized sunglass, that I used for 2 years, broke on Monday after we floated. It was $20 from Wal Mart so I think it did a great job and I saw lots of fish through it for the past 2 years. Now I got a $30 pair so it should last for next 3 years??
For all the reasons above, this trip started very slow.
Posted by Lefty Angler & Flies at 9:51 PM

Email ThisBlogThis!Share to TwitterShare to FacebookShare to Pinterest
Labels: trips