Yakima River is unique mostly because it's one of the most intenselly irrigated rivers in US. Yet still keeping a catch & release fishery. Another unique feature to discuss would be a Skwala stonefly hatch in winter/early spring. Besides midges and baetis, these large bugs would cause some surface activities and help us select nymph patterns. Worley Bugger has a good information rather than I do......


Size seems easy to figure out but the color drives tyers go mad, I guess. For both nymph and adult, it's like tan, olive, brown, or combo of two or three. How many colors are we looking for then?? 7 combos of colors???


I adapted probably the best Salmonfly pattern for Skwala in terms of the color. It's a Nick's Sunken Stone developed by Mr. Nick at Blue Ribbon Flies. It reprents a egg-laying female in a sitting position rather than skittering or fluttering. I showed this to Tim at Worley Bugger and I bet he's got the point of this fly. 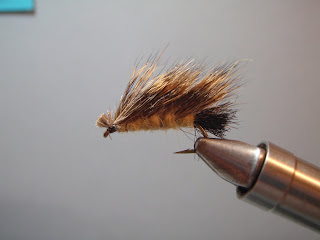 For the same reason about the color, I tied a GM Nymph also from Blue Ribbon Flies in somewhere between olive and brown, while the original is a dark imitation. 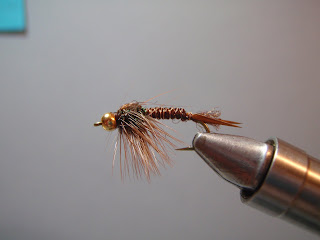 Furthermore, I tied some simple soft-hackles in large sizes. I did study some entomology stuffs. These little stonefly nymphs can swim to the bank to emerge while big Salmonfly and Golden Stone nymphs walk the bottom. Shown is Grouse & Claret. 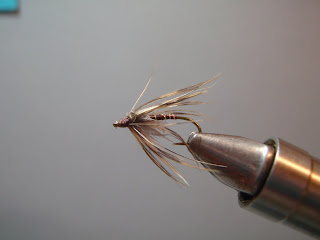 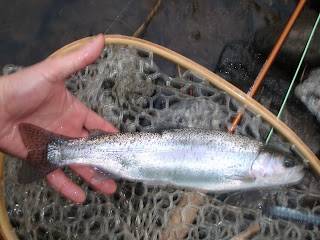 It did take my soft-hackle confidentially in the middle of its mouth. 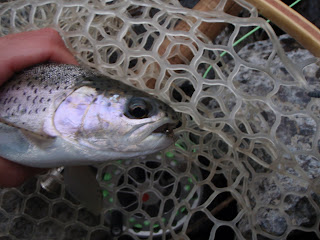 Well, so far as I've been reporting, I am catching one somewhat respectable trout a day. You might ask: what are you doing?, is that fun?. etc........ Certainly it's slow I admit. But belive or not, I am sincerely enjoying what I am doing and getting. I am basically enjoying the "process" to know this river. First, I depend on tips and info from Worley Bugger and maps. Then I make my own driving and observation for spots and flies. Testing and challenging myself here and there, ideally to fish as I like with my favorite flies, that sort...... I am pushing myself very hard and trying to do something without hiring guides. I never mean to be cheap but mostly I am testing myself to see what I can do. Also there are some very localized hatches in terms of sections and times of the day..............

Then again the joy of getting out to the river in the middle of winter!! And good foods in Ellensburg which are worth making drives all the way!! Taco Del Mar serves a humongous brito that weighs us two-pound instantly!! yet very healthy and tasty!!

I just hope I will be hooking into one or more of 18-inch class or even bigger ones soon.