No, sir, no, mam, I haven't been in West Yellowstone yet. Not the "Between Lakes" of Madison (between Hebgen and Quake Lakes), but right here in eastern WA.
This is what happened today. My original destination was Leech Lake by White Pass. It's a fly-fishing only fishery but due to the "Lake allergy" I used to have, I haven't been there. Besides that, I wasn't sure how much I can fish from the banks or with a little wading. And this was meant to be the last rehearsing before I hit the road to West Yellowstone.
On the way, I dropped by the Forest Service Station in Naches to pick up a back-country topo map. This is for something in my mind for my summer project. I might make an over-night hike-&-fish, at least a day-hike. As I was buying the map, I said to the officer,
"I'm gonna fish at Leech Lake today."
"It's still covered by two-foot of snow and the access road is not opened yet."
"What??"
I had to make a contingency plan immediately. But then, one of the most interesting and challenging things for being a fly-fisherman is to be flexible. Right now all the rivers around here are middle of run-offs. I guessed one section that might be good enough though I haven't been there either. It was the section of Tieton River between Clear and Rimrock Lakes. That section doesn't have little creeks that dump run-off waters but just a channel "Between Lakes" as in Madison. Tieton River below Rimrock Lake was indeed chocolate color as I drove up. I guessed right. This section was remained emerald green at least. Here's a description from the map I bought this morning. I had to make some driving for the access, as I do at every new water. On the way, I saw this little guy doing something. 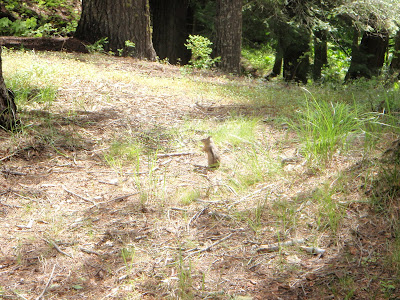 I parked at the top end of Rimrock Lake and walked upstream to the spillway/fall of Clear Lake. As seen in the sky, it was actually colder than I thought. Kind reminder before hiking into Yellowstone: "do not overlook mountains".

Also, water was surprisingly cold!! It might be close to Gallatin at this time of the year, one of the coldest waters in Yellowstone Country. 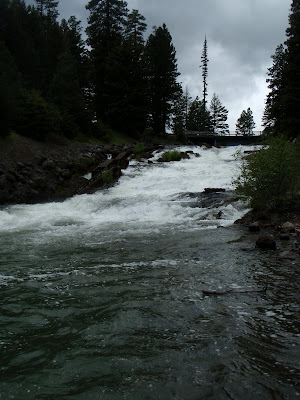 Nymphs seemed to be the best bet under the circumstance. Since I planned to fish the lake, I didn't carry stonefly nymphs and woolly buggers. But I made up with whatever I had in my vest. What a joke!! At a deep pool just below the fall, I foul-hooked a hatchery rainbow with an egg fly!! I caught several more including a beautiful native Westslope Cutthroat that I failed to take a picture. 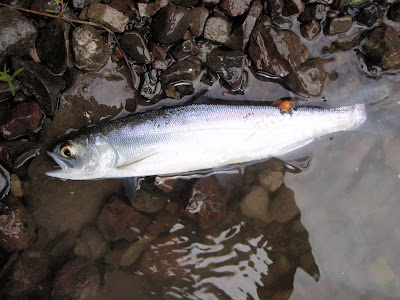 Maybe I should have kept this for my lunch??
No, I already prepared a "gourmet lunch" in my own level. I started my propane on a stub and boiled Rotini pasta. That was tossed and eaten with.................Nothing can be more Italian than this, I believe?? 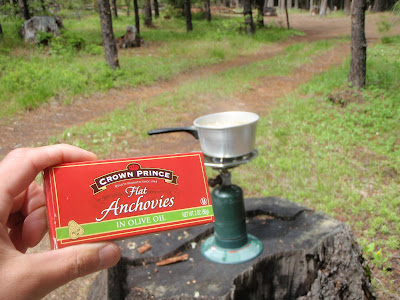 Fishing was not done as I planned but I did enjoy the day. I made a contingency plan and didn't get skunked. Yet, I was planning to fish two or three hours anyway along with my cooking plan.

Though I didn't fish the lake, I practiced some nymph fishing instead, as I will be doing in Madison. My "blood knot" held pretty well too!!

I think I have done enough homework around here. So now I'm heading to Yellowstone!!