As I'm heading to Yellowstone waters late in June, my anticipation and excitement are, as anybody else, Salmonfly and Golden Stonefly hatch!! Even if we don't see any surface activities, in that case, trout love to bite on huge stonefly nymphs.
As I was day-dreaming of fishing with huge stonefly patterns, one unforgettable fly came up to my mind. It's the Bunyan Bug as read in the book "A River Runs Through It". Some of you might think this is the Hollywood creation?? Not at all. To understand the depth of authenticity of the movie, one has to read the book by Norman Maclean. It's never meant to be instructional but with the depth and delicacy of fly-fishing that is still continued in our head after a century.
Here's the description of Bunyan Bug, from page 86 of the book. 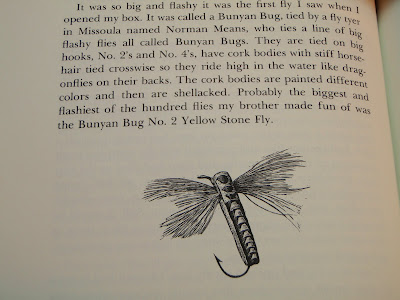 But this fly is very hard to tie and reproduce in our modern fishing situations. Though I wished to tie the original, I came up with a website about the modern interpretation of this famous fly. Please drop by the website below.
http://frontrangeanglers.com/newsletter/april05/bunyanbug.htm
It does say the original recipe but also the modern foam pattern caught my eyes and looked reproductive all the time. Tied with buoyant foams instead of corks!!
Instead of horse mane hair as in original (I think no way to obtain them unless being a horse-thief), I used EP fiber. I like its transparent looking as wings, also I might as well added an egg sack with the black EP Fibers. Then, as you can see, under-body is a piece of orange foam and upper-body is a piece of black foam. 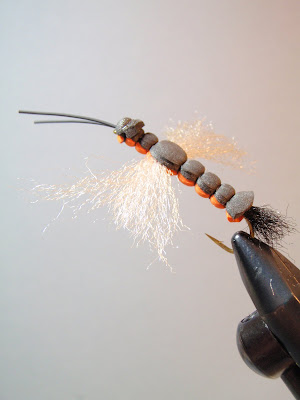 I tied a Golden Stonefly imitation with a piece of yellow foam as an under-belly. 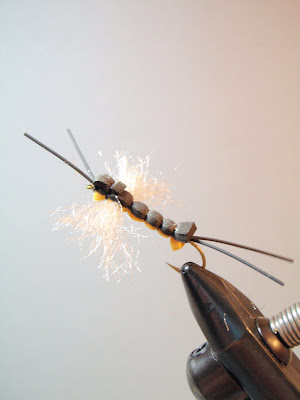 Later on, as I tried to simplify, I might as well have tied with variegated chenille, as I tie rubber-leg stonefly nymphs. Why not?? I marinated the chenille body with lots of floating oil. It should float really well. This is meant to be a Salmonfly. 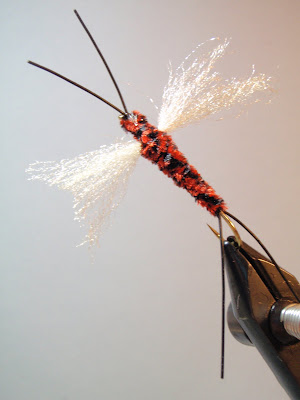 And this is meant to be a Golden stonefly. I believe these represent spent/dead adults on the surface and also can be swing under the surface as drowned adults. 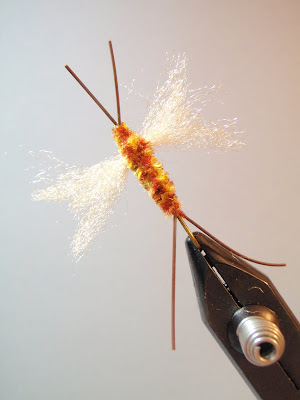 These ties look pretty good and fill my box. But also, I did my best to imitate the authentic Bunyan Bug with corks. And I did.