The day after I lost my camera (a week ago from now), I ordered a new camera. I just received it today. It's been surprising how fast the progress of modern technology is. I'm just a casual photographer but I know how fast new models have been developed in the same price (lower in a way compared to older models). For example, when I bought my last one (water & shock-proof with 8MP) in 2008 with $300, Olympus produced the same model in 10MP. Then mine had been reduced to $200 and eventually out of production. So I checked Olympus website first, before any retail stores, and I found this 14MP camera with water & shock proof. A week ago, it was $30 discount if I order directly from Olympus. I proceeded with my sleepy eyes... So I ordered in my lucky color, ORANGE.

Surprisingly I got a phone call from Olympus to make sure the order. I spoke with a nice person and explained to him that I had liked my last one and how I had lost it. He says "maybe someday someone can fish it for you, get it back to you, and still works!!" and "we also have floating straps if you are interested".

Floating straps or device......is there anything I could think of?
I recalled huge bobbers that were handed during Simms Guide Event in April as for tests and promotions. I thought they might work when used at once. At least light and indestructible. So I made a ring with 30-lb mono with a blood knot, attached it to the camera, and then attached bobbers. Here's a shot taken on a mirror.

It might be heavier and bulkier than regular straps....... 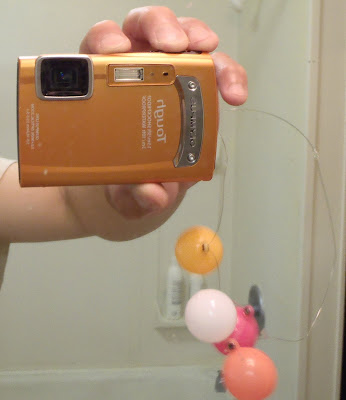 I tested the whole set-up in salad bowl filled with water in my kitchen. It seems 4 bobbers can give some floating to the camera, better than nothing or better than my last experience. I will test at rivers next.

You may laugh at me or question me when this bobber strap is hanging out of my pockets. But I don't care!! You will understand when your favorite attachments are washed away in the river.

Anyway, I hope much more trout will be captured with this camera from now on!!
Posted by Lefty Angler & Flies at 9:37 PM