I seem to be repeating but it's been an odd summer. One spell of hot summer, followed by a few freezing days, now smokes of wildfire from surrounding states/areas dominate the air!! Regardless of what we have to deal with, fishing has been good!! It's been hit and miss but now it's finally & officially The Terrestrial Time in Yellowstone Country!

As I introduced in the previous post, Jack Gartside's Pheasant Hopper has become my ultimate hopper pattern. 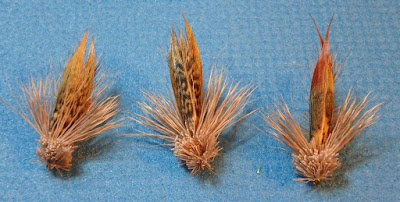 The best companion floatant, that I have just found out, is this one. In my area, Dan Bailey's supplies. Indeed this one works for any types of dry-flies. To me, it's perfect for deer-hair patterns (wings, heads, etc.) as I don't have to rub it among hairs, rather just dip it!! By the way, shown is the olive & small Pheasant Hopper - a perfect leaf-hopper imitation!! 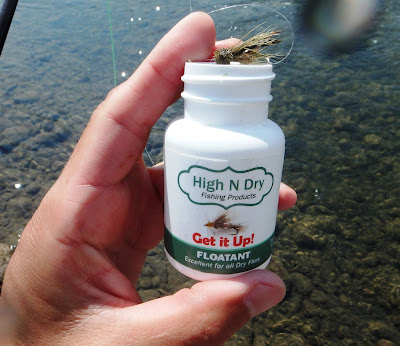 With these items, I hit Gallatin River. It was one of "a few cold days" between hot spells......... Overall fishing was slow (I could have nymphed all day and I did for a short while in the morning and caught two massive Whitefish!!). Toward the end of the day, along the grassy cutbank, I finally got a quiet rise on my hopper. I thought it would be a so-so size brown, considering the way it took. Then it ran and fought like a rainbow in a nice size. I really couldn't tell till I net it......... 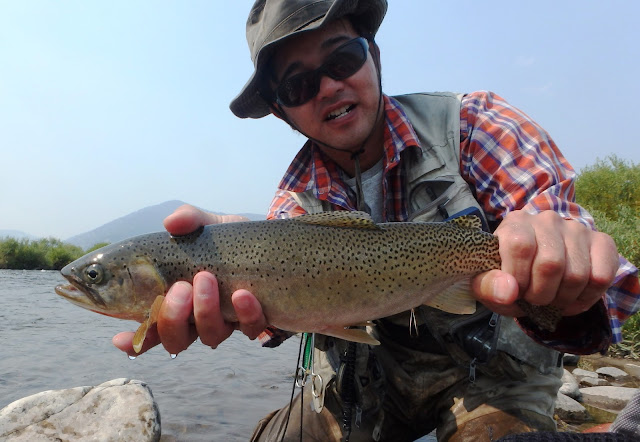 It was some of the nicest Westslope Cutt I ever caught. You see it's Westslope once I drive over one hill to the west from Livingston. It's interesting, isn't it? Yet, in Gallatin, the seemingly very pure one in this size would be very rare nowadays.

Then I have so many sweet memories from my days in Eastern Washington (Yakima Valley). I just love Westslope as much as I do Yellowstone!! 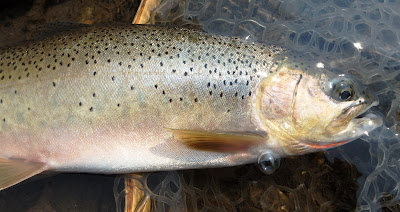 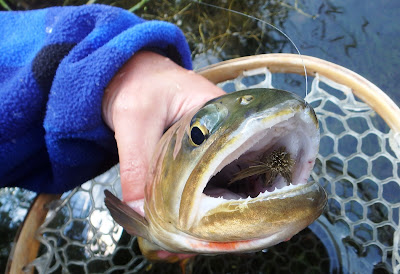 Back to Lamar River in YNP, it was somewhat smokey but not as bad as before or Bozeman area (including the part of Gallatin where I fished). It was not much going on (or I was lazy?) till mid-day. Before I took a break for lunch, I dropped a Green Drake nymph under a dun pattern, I got a nice one! - actually this dinosaur-looking one seems somewhat familiar..........

Then the real objective of my visit began. Do you remember this tiny cicada pumped out of a big Cutt? I've been thinking to imitate somehow........... It was rusty orange and very hard shell. I have noted it must have been crunchy......... 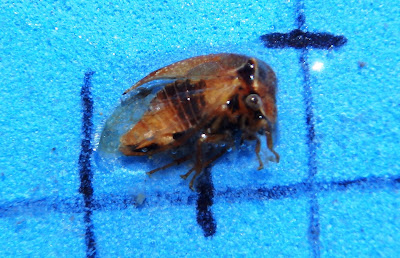 After some trials & errors, on the bench and rivers, Micro Crunchy Cicada was born!! 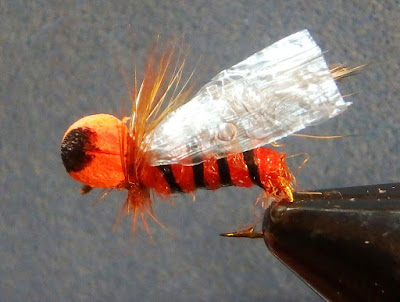 Actually it was already tested on the Gallatin. In spite of slow fishing, I did get several rises and look-ups. That let me know I was on the right path. 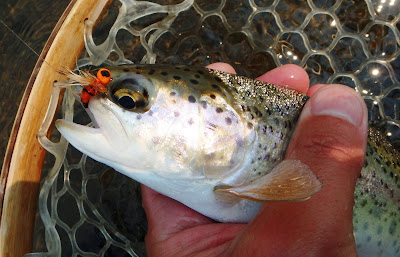 Since then I improved a few more (reinforcement!).
This day on the Lamar, Yellowstone Cutt went nuts!! They were definitely looking up at my new cicada pattern!! It started with this one, plus a couple of near-misses before. 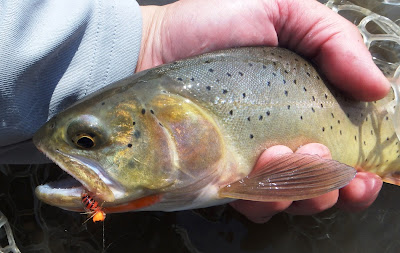 From the same spot where I caught a nice one on a Pheasant Hopper the other day, another great Cutt came up and aimed the new cicada!! 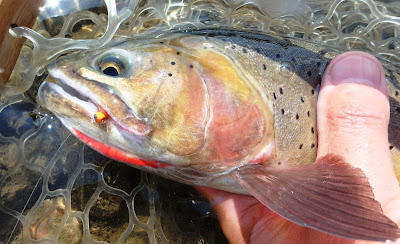 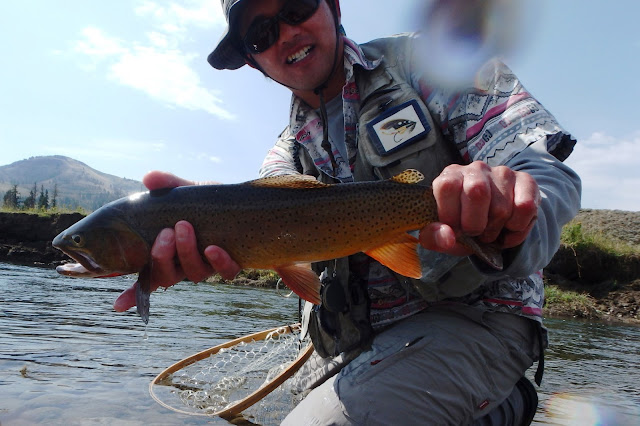 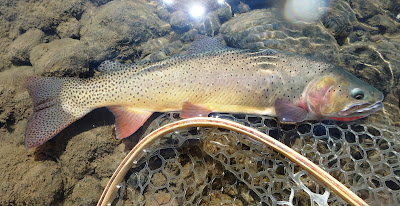 Actions went on. My laughter was echoing in the meadow as I was fishing all by myself. This one took it, fought hard, then kindly sat still underwater for the ultimate proof pic!! 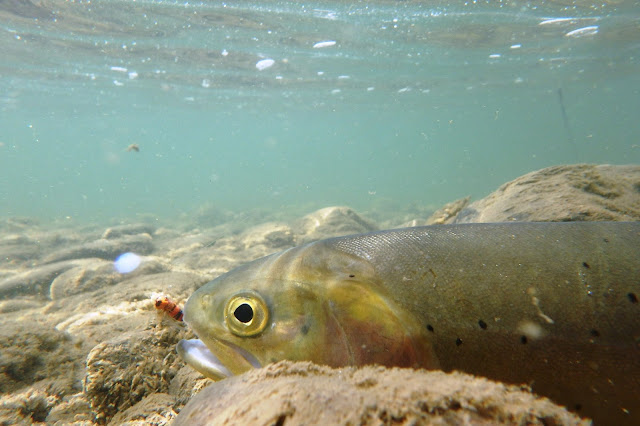 Happily broken! A couple more were ruined by Cutt and the other one was broken off!!
There will be a tying instruction video at my YouTube channel sometime during this coming winter. 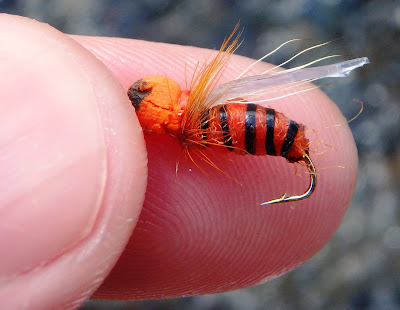 Though my cicada was all I needed, it's always important to check trout's stomachs! 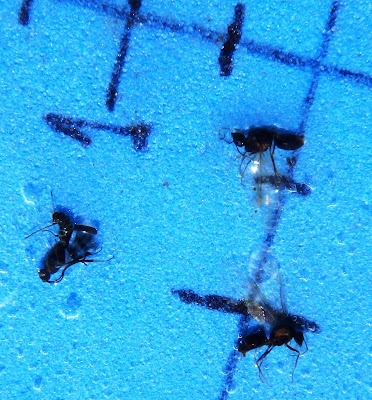 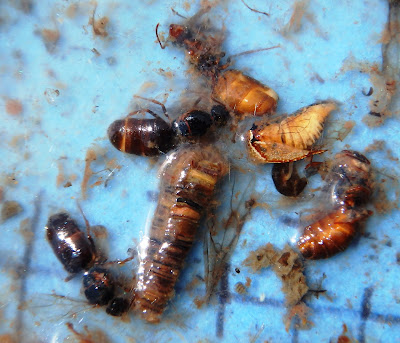 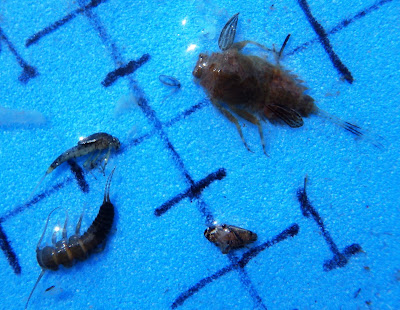 Weather depending, terrestrial actions will continue for the couple more weeks!! Hit it while you can!!
Posted by Lefty Angler at 3:43 PM