I'm usually busy with something else at this time of year, and have never fished the Yellowstone Park opening day, always Saturday of Memorial Day weekend. However, this year, I somehow had a blank schedule. Then my lovely bride was willing to go & fish, as she had a great time last year on the opening day.

My own YNP opening day is usually sometime in June, sometimes even in July. By then there are more waters available to choose from and people are scattering all over. And I deliberately choose somewhere minor. I like this perverseness of mine..........

Traditional opening day fishing is done on Firehole River, which is typically only one available to fish at that point. Furthermore ideally with dry-flies. I knew that's where most people are heading. I was sure I was able to sneak in somewhere and enjoy some. However, due to my perverseness, I wanted to do something different from traditions or conventions. Then the river check from the previous weekend gave me confidence to go ahead. My choice was to stick with the Madison. I persuaded Renee that we would catch some trout, even bigger than those in the Firehole. Then the most important factor to me was: after all I've been guiding clients at spring creek with match-the-hatch flies. I wanted to fish Big, Heavy, and Deep for some changes😎.

Where would we start from? Now my perverseness worked in the other way. Starting from Madison Junction, we can theoretically fish Firehole, Gibbon, and Madison all at once😁. So here we were at the Junction Pool at around 9:00am. As we walked, I spotted something bright.
😐😑😒😔😕😖
Several thoughts conjured up in my mind quickly.......
Has this been abandoned since last year or from the same morning rig before we arrived?
I doubt the latter as it's been cold nights and mornings. It's dark and YNP regulations stipulate "no fishing is allowed with artificial lights".
Over all, Madison is designated as "Fly Fishing Only" (I understand one can cast out flies with the spinning rod). Is this even legal to possess and throw into the river?
UNLESS!! this ornery red hook is a simple Wire Worm😨 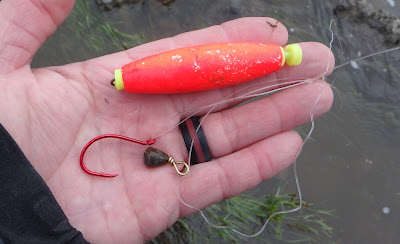 Now back to the real topic.......
First we had to decode this high water with volume. Then we had to go heavy and deep. It was somewhat struggling at the beginning, but, just as I assumed, it was doable. 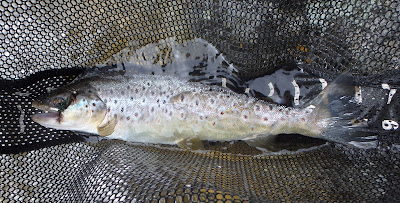 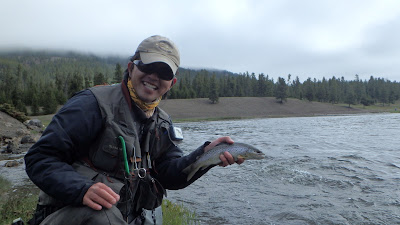 I immediately this trout had such a plump belly for its size so I did stomach-pump. I see😲
So the Wire Worm could've been what the owner of that rig was doing.......... 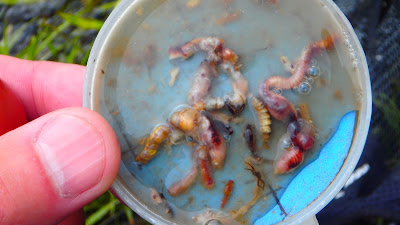 Renee's opener came in a sudden.

A massive whitie was her opening fish🎊 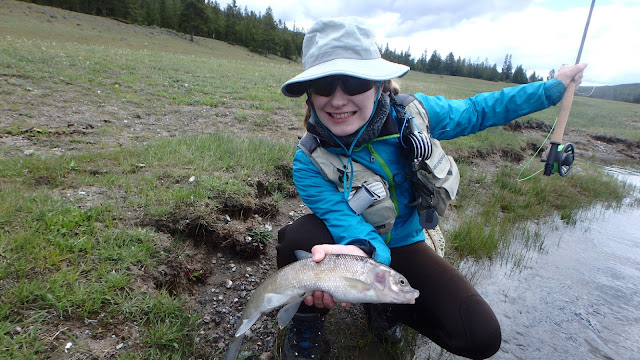 After this I think she netted more than I did. 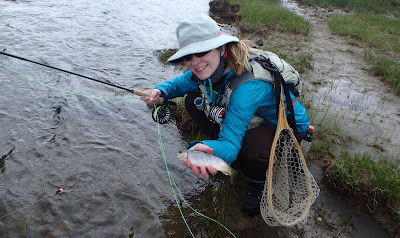 We made some of the best lunches to celebrate the opening day and the big weekend. Unlockwise from top; Japanese rice-ball (with seaweed), seafood salad, special mac-n-cheese, supreme cheese burger with grilled tomatoes, and grilled zucchini (in place of pickles). 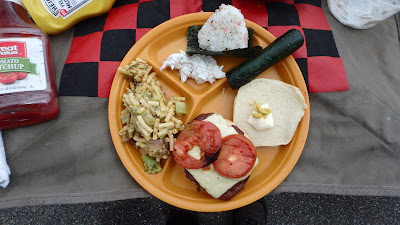 We moved to another promising spot of the Madison. 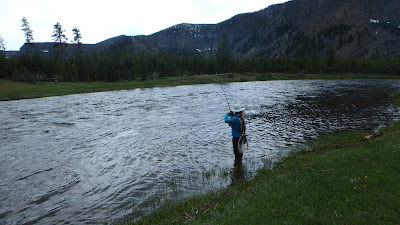 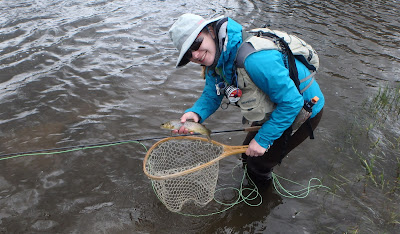 Stomach pump result was impressive. This brown was feeding on PMD Duns and this told us insect hatches happened on the Madison too and trout were feeding on perhaps when and where we didn't know.........😎 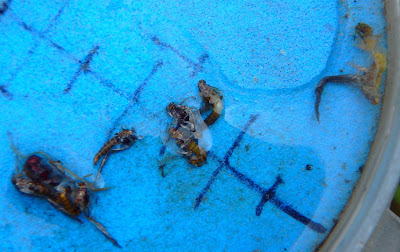 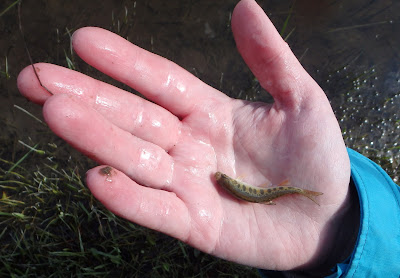 I like the seasonal changes of Park rivers. One by one a river or a lake comes into shape during the early weeks. Then the summer arrives and the season ends as the fall deepens. For the last several years, I seem to have lost the sentiments of opening/closing as I've been busy with guide schedules. So I take it's a good opportunity that I was able to fish the opening day.
May it be a good fishing season in YNP😘🙇🙏
Posted by Lefty Angler at 5:10 PM