I had been waiting for opportunities to swing large soft hackles as an soft hackle enthusiast (mania or addict, I may be called). Madison is the greatest riffly river to swing insect imitations among hatches. But when targetting run-up spawners with large soft hackles, my understanding is that those flies would probably trigger something within trout (eyes, instinct, etc) because they come up several feet to take the flies or chase them while swung.

I experienced the greatest swing action ever!!
As I mentioned in my previous post, Soft Hackle Streamer was one of my top choices, tied in white and black. These worked the best on cloudy day, either swinging or stripping long and rapid. 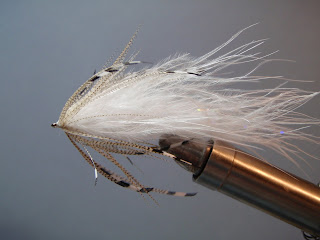 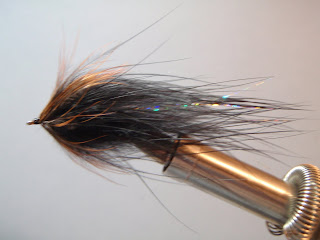 In the evening of Friday, Oct 30th, I tried Cable Car Run and then might as well Barn's Pool #1. At the very last cast, this little 13-inch browny bit on black Soft Hackle Streamer with typical swinging action; tap & tap, then run or leap, and hook itself. Not a bad way to fisnish the day. 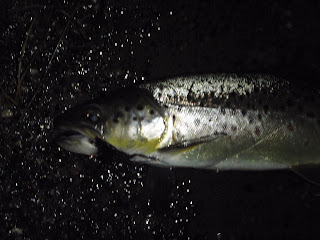 Just a quick note here. I didn't want to get close to Barn's Pool #1 or #2 because it's just crazy to make a line with lots of people like at a school cafe. But somehow this year, there weren't many people at all. My guess is one: because it's colder than last several years and two: I heard they say run-up is strong up to Madison Junction. Well, there were much more people around the top section than Barn's Pools!! I played a game right!

Next day, Saturday, Oct 31st, only 1 day away from the closure, I went to Barn's Pool #1. I went through the run as the first customer. Fished for an hour and got no actions. I moved up to Cable Car and swung down. Then just below the cement blocks where it seems hard to fish (wider, deeper, and slower than upstream), I was about to get off the river, yet making some more swings. Then something I had never seen before happenned while fly-fishing. That's the most exciting scene ever but I had never expected this while swinging soft hackles.

My line and leader were straight and swinging downstream. Then several feet straight ahead of the tip of my fly line, suddenly something like a submarine protruded!! Or should I say, it was like an eyewitness video for seaserpent or Nessie-like monsters? For a nano-second, I doubted my eyes, but the next nano-second I cooled down and figured it must be trout coming to my fly and instinctively I set the hook like dry-fly fishing. Next that something like submarine did become a submarine. I fought carefully and confidentially. A 19-inch brown came up to take my skinny Soft Hackle Streamer (black) all the way to the surface, showing his head and back!! Magnificent!! 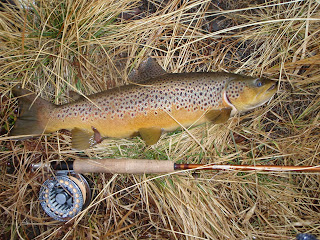 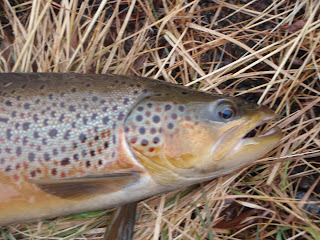 In the evening of same day after I fished for Baetis hatch at Upper Haynes and swung some at Madison Junction, I went back to Cable Car and Pool #1 again. I looked for the second time but nothing really happenned and I was about to quit then I saw the same big rise/attack again!! I tried to set the hook hard and strip some in, it was something really big and tried to run. then my fly line got tangled on the handle of my reel......that something big snapped away with a black Soft Hackle Streamer. I didn't cry or get disappointed. Instead I smiled and said "see you tomorrow" These mysterious unlanded trout always make me go back to Madison.

But the most memorable and my own personal biggest achievment during this trip was the following. This happenned on my first day in, Tuesday, Oct 27th. So you can imagine how I spent the rest of my trip, easy and relaxed. I just fished as I like. I did pursue and expect bigger individuals later on but it was really OK even if I don't see any. I brought my own question and expectation to Madison and I got an answer. That was enough for me.

Let me formally introduce you my own design "Coyote". Full name "Coyoted" Pheasant Soft Hackle. I will definitely post all the stories behind how I came up this fly and why I like it so much soon after the trip reports. 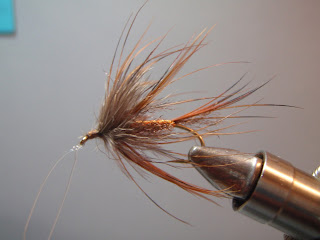 About 5:00pm on that day, as heading back from Firehole, I stopped by Barn's Pool #1. Nobody was there. On the way, I saw several people left in upper streatches so I guessed they might have moved after they killed (or spooked) the pool. Just to get started my swinging for an entire trip, I started from Cable Car Run. I had a good action, tap & tap and run!, somehow my leader broke off. I fished down to Barn's Pool #1 now with white Soft Hackle Streamer trailed with my Coyote. As the sun set, I took my sunglasses off and tried to pack into my vest with my left hand, which means holding my rod with my right hand, though I am lefty, while swinging. I felt two nice taps then the solid run!! Holding my rod with my off hand, I essentially did one of the biggest mantra when swinging "resist your impulse to set the hook, instead don't do nothing!!" Now I swtiched my rod into my left hand, then a huge trout leaped twice!! I tried to drag it to the shallow and noticed it was on my Coyote!! I screamed twice, since I knew nobody was there, "Coyooooooote!!" and Coyoteeeeeeeee!!"
A 19-inch fat hen rainbow came to my net and camera. 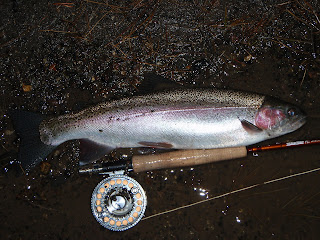 Did she like it or just mistake as another proven pattern especially in the darkness? But the picture shows my Coyote was hooked solidly on the side of lower jaw, a typical set point when swinging soft hackles. 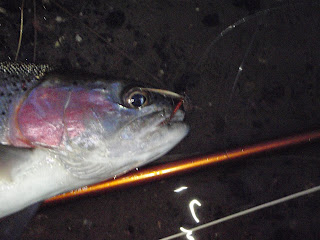 These two 19-inchers were the biggest for this trip. I didn't catch anything over 20-inch or 5-lb but I really like what I did and what I got. I caught respectable trout with my own favorite way and favorite flies. This is the top highlight of my entire trip.