My winter Yakima project has passed the turning point as the month changed. I'll find out what March will bring. Including yesterday, I can take off every Wednesday. Last one will be reserved for getting ready, packing things, and loading gears for the April trip to Livingston, so I have 3 more visits left. How did I do yesterday?

It was warm and sunny with rare clouds and winds. As I drove up the Canyon, I noticed the water level was high. As I parked and got closer to the river, it was about a foot higher than February. I concerned that the dam release started, which would limit my access and change my plans. But according to Worley Bugger, it was a temporal situation due to rain shower in the area and all the tributaries were sending some amount of waters to Yakima. It was not a dark chocolate run-off water. There are enough visibility left.

Again, I thought insect hatches and surface activities were messed up. Besides that, I wanted to go with streamers right off the bat for some reasons. 1. practice for my April trip, 2. several patterns I wanted to test, 3. with warm temperature yet high water, I thought most trout would set closer to the banks, 4 prospect big fish!, and 5. cover the streatch effectively that I can't do with drag free presentaion of dry flies and nymphs because of features of the banks. I rigged up my 6wt with Kelly Galloup's style.

But.......midges were hatching fine again like last week...... Also this time, I saw actual rises. There might have been some skwala stones around because I saw and heard some big gulping rising sounds. I wanted to have some fun and excites with dry flies, at least I should have tried to "match the hatch", and that's one of my reasons and objectives of this winter project. But the streatch I like to fish is with deep under-cut banks, high in my back with trees and bushes. This is why I finally chose to fish downstream by using all the information and situation around me. Maybe I should have and indeed I wanted to try soft-hackles among hatches (= my speciality and obcession). But I had more reasons to go with streames as above.

I have lots of patterns. One of my favorite is Doug's Home Invader. I learned directly from him. 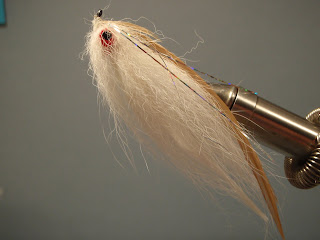 With his tie in olive-tan, a nice healthy rainbow came out!! 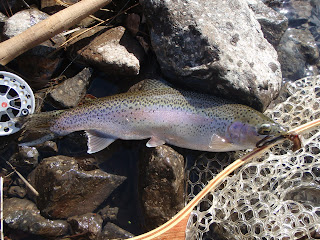 Nice 16-incher. Did you like it? Not the biggest of the river or a proud catch but I was relieved to get out of "skunk" of last week for sure.... 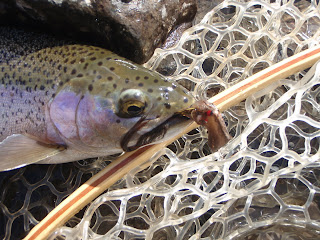 By 1:00pm, I could cover the entire streatch, just about a mile with some hard walks, effectively without snagging trees behind me that I can never do with dead-drift dry flies and nymphs.

Yesterday for lunch, I dropped by a grocery store in town for something in deli corner. Maybe sandwiches, I wasn't sure. I saw "baked" chicken which sounded less greasier than "fried" right next to it. It did taste good but it wasn't as less greasy as I expected or as it looked. At least I was proud of myself that I managed the instant cravings for pizza (that every human being has)right there at the counter.


After a quick grab, I drove up to Thorp access point. But water was dangerously high for me to wade in. Higher than 4 weeks ago, my first visit around here!! Oh, boy it seems to me only 4 days ago!! Actual fishing days-wise, indeed it was only 4 days ago. i changed my plan and headed back to the same streatch in the Canyon. I have learned other spots and streatches but due to the water level, the same streatch sounded a safer bet for my own safety and catching-expectation.


I was tying on Home Invader again (my tie in white, smaller than the pic above). I hooked something. Not so big but from its flash and fighting, I thought I finally hooked a whitefish. I have caught whitefish more than enough at Madison River so I don't want to see or touch them. But not seeing them for a while makes me wonder where the heck they were......
Well, it was not a whitie. I couldn't identify. The skin/scale is not as coarse as whitie and its mouth is like trout's without teeth. I have just asked Steve at Worley Bugger for identification. He told me this is the "pike minnow", often called "squaw fish", which is native and a predator. 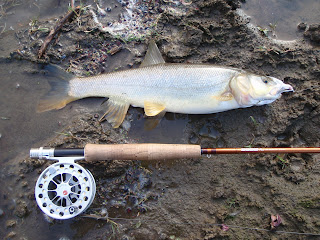 He also told me there's a bounty program for catching and killing these along Columbia River. Oh yeah, I have read a little article in a magazine too. Pike minnow is hated for munching on juvenile salmon and steelhead. How about bass, sturgeon, walleye, carp, etc in the river system around here?? And these salmonoids feed on their own fries.....whatever..... 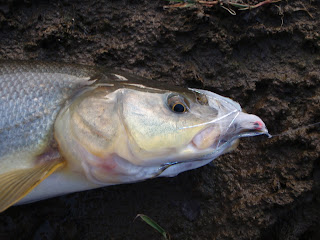 OK, sounds like I have to play a bit with water level for next visits. I have found several streatches I like to fish and several fly patterns that work. And I am developing my tactics.

I just want to see one big 18-inch or bigger wild rainbow and/or native westslope before I hit the road to Montana.......