It's been over two weeks since my wreck in Livingston. My neck has healed well. I actually feel a bit stronger than before since muscle must have been rebuilt. Pollen allergy seems to be gone due to some cooler weather around here. But I'm still suffering the tail-end of a bad case of flu. I can't believe it!!

Then my F-150 (a.k.a. Big-Fella) has gone through some work. First, a new tire rim was installed. Second, a canopy window was installed. Then I was planning to do some body-filling and painting on the canopy myself but the glass shop found another scary fact of my wreck. Besides the gush in the front, he found a line of crack that ran vertically on top of the canopy. That told us that the canopy must have experienced a severe concussion then bounced back. Also, we noticed the whole bed body was shifted an inch to the left. So, third and the last, I brought to a local body shop and left it there for the last couple of days. 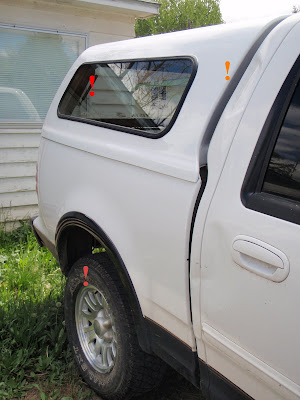 Today, I picked it up. Take a look at those three points (the ceiling is not shown). You can see some dents on the truck cab but that will be another job and they are not going to leak for a while.

So it seems Big Fella and I have made it through physically and financially without being killed or broke. But this whole "cosmetic surgery" cost me more than I want. It hurts when I think of new fishing gears and replacing a computer. There's a Japanese saying, "he can't twist his neck due to the debt", meaning a heavy debt. Well, my neck hurts again!!!

No, I am not that bad...... Summer trip (or trips?) plan is coming now!! Lots of things going on at my bench and then meanwhile, I will go out fishing around here next week.