Apr 10th, I drove to Belgrade. My original plan was to fish East Gallatin in the morning and lower section of Gallatin River in the afternoon. I just heard East Gallatin is overlooked fishery and it holds some big trout. As for Gallatin, my experience was limited to only a few miles of Yellowstone National Park section. So I intended to visit two new waters in a same day.
But I hate cruising around Belgrade. The ways roads are crossing and town is composed are so complicated to me. After some stops and u-turns, I found "Four Corner Access" of Gallatin River first. I found where I was on the map so I might as well started fishing. 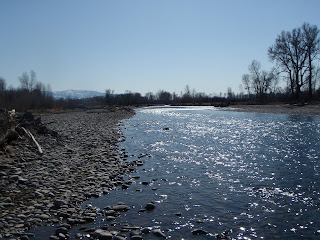 I started with streamers as I did for the past three days. I lost two by snagging trees. Then I recalled that Gallatin is related to Madison, a little brother. Better bet to get into trout would be nymphs, considering time of the day and the season. And probably the best pattern to be tied on would be stonefly nymphs. My best is Rubber Leg. 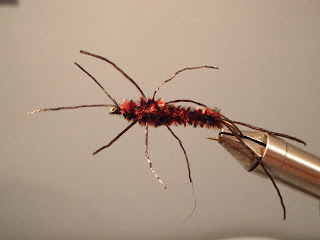 At a confluence where a little unnamed creek joins Gallatin, I really went to deep yet dead drifting nymphs. I pulled out a nice 16-incher, almost 17". 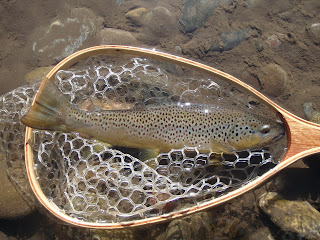 Since nobody was around and there were some dead logs at the banks. I self-timered myself. 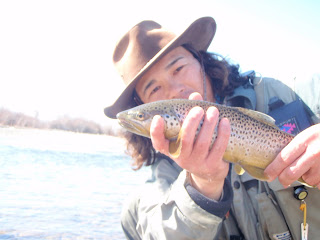 In the afternoon, I made another frustrating drive to find parking accesses to East Gallatin. I finally found one that seemed appropriate and would bother anybody.
East Gallatin was probably the most mysterious river I have ever stepped in so far. First, I bet it's a far-distant cousin of Gallatin. I'd say East Gallatin is related to Beaver Meadow section of Madison River within Yellowstone National Park. Or maybe a meadow section of Gibbon River. There are plenty of cutbanks all through on both sides. Very fishy. Brown trout must like here. Then I noticed the water was silted and murky while no other rivers in the area had no signs of runoff yet. River bottom was oftentimes muddy for the first few feet from the banks and then solid gravel footing. Yet because of water clarity, I wasn't sure how far I can wade in or if I can cross. In my motel room I was watching lots of Animal Planet programs such as River Monster and Lost Tapes. So I was actually scared of this mysterious place. I was casting streamers around cutbanks all afternoon but I didn't have any action at all. Later local anglers, guides, and shops told me that I was fishing at less fish section and water clarity was always like this because there were lots of irrigation and spills from farms and ranches in the area.
I found a fence post to set my camera. See the river is meandering the meadow from my right hand to left. 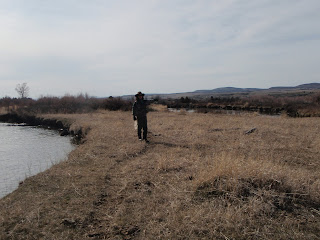 Around Gallatin in the morning, I didn't see anybody till noon though it was Saturday. At one of accesses of East Gallatin, I talked to local anglers only on my way back to Livingston. It could be a bit tough and challenging fishing at this time of the year but there was plenty of solitude in one of the most popular destinations. Also quite a shame for me that I couldn't get out while I was a student at Montana State Bozeman.