I went back to Rocky Ford last Thursday, 21st. Though my previous attempt was failed two weeks ago, I didn't feel some sort of bloody revenge or anything. I just wanted to get out. Rocky Ford is one of a few options around here in winter. Now it might be a time for me to explore Yakima River for another option........
I got out with my 4wt, which is always fun to fish with. I consider this rig as a classic and an all-rounder for me. 4wt & 8-foot with a so-so reel and a double taper floating line (both from Cortland). This handles most of situation for smaller dry flies and nymphs at smaller streams. Here's my rig with a brown trout from Armstrong's. 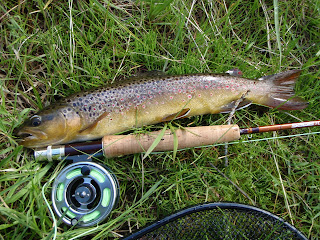 I didn't get any action in the morning with dry flies and soft-hackles for Baetis and midges. Well, I couldn't get knocked out twice in a row, so I moved to the upper end of creek and tried to salvage the day. And I did. In the afternoon, midge hatching was very strong. This tiny soft-hackle "peacock herl & yellow larva style" that i learned from sylvester Nemes' book seems to be a regular of my blog. 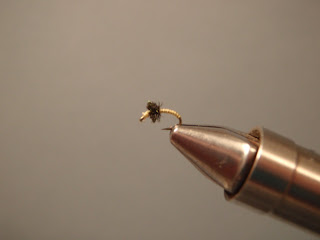 I caught a 12-incher as the first one for this year with this fly. But I failed to take a picuture or two. I kept going. I caught 3 more small trout!! 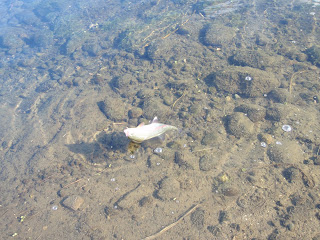 Trout here is triploids from the hatchery so in a way, it is pretty rare that I was catching this small fish. Maybe in other words, within a year or so there would be more large trout. 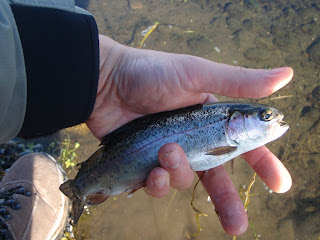 The very last fish was the typical of Rocky Ford, 18-19" & 3lb, again on swinging this tiny soft-hackle of mine. I felt a really big tug. It leaped several times and I felt I was relly "ON" since last November. I thought it leaped more than I expected for trout I ever caught at here or maybe I might have fought on it as if with my 6wt and larger tippet. It snapped off my 6X...... But I was really satisfied and might as well go home.


While at the parking lot, an old gentleman talked to me. He happenned to be the same gentleman from Seattle who asked me what fly I was using when I had the best day at Rocky Ford in last September. This Mini San Juan Worm was a hit on that day, so Mr. Duane remembered me as a "Mini SJ Worm" guy!!!??? 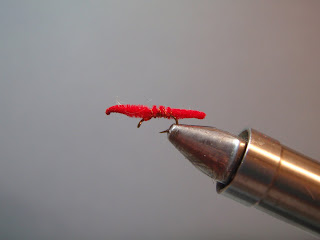 Thank you, sir!! But that's not really what I am!! I am a soft-hackle enthusiast who loves to swing, sir!! Please look at my older post for my soft-hackles and great success at Madison River in Yellowstone Park section!! (I'm pleading "not guilty" for being simple or being almost like a bait-fisherman with a SJ Worm ..........just kidding \("_")/ ).

Mr. Duane is a Montana origin. We talked about rivers and shops in common.

Rocky Ford is always crowded and sometimes several people are a bit annoying. But also there always are some good people like him. It is always nice to make friends at the river.