Best Day at Rocky Ford - AM

Last time I said "Best day at the Rocky Ford" was last September when I went there without too much attention and expectation and I forgot my camera.


Today, I have had a better day. Fish count or size might be the same. But a bit more advanced to me, especially about my flies.


A quick note for today's condition: I bet nobody was able to fish yesterday, May 3rd. Wind was blowing over 30mph all over eastern WA and especially Ephrata was warned for dust & gust. Today it went down to occasional 10mph wind. Furthermore, I saw only 3 cars and 4 fishermen, including myself. People has just started fishing lakes around here, I believe.


Enough said. Besides I wanted to catch fish, I wanted to try new patterns for me along with some idea of mine. For scud, I have just learned a Ray Charles. But I added a "Hot Point". It used to be believed as an egg sack but recently it was discovered that it is caused by internal parasites of scud and that make trout vulnerable as easy meal (more details here from West Fly). But the way I tied in orange herls between olive is the same technique as used in Royal Wulff. So I named it "Royal Ray Charles". Sounds cool? 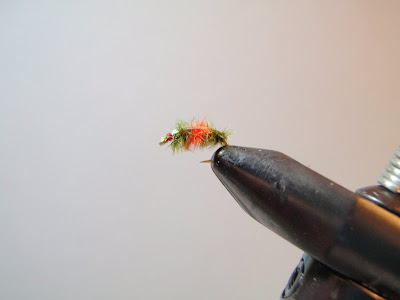 It did work! This fat 16-incher (no biggie at all at Rocky Ford) took it confidentially. 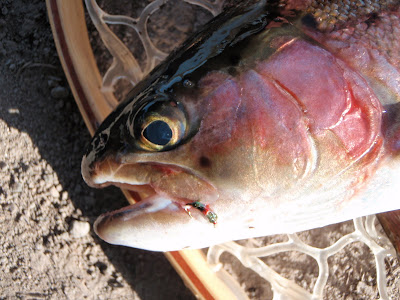 After this I hooked half a dozen in a short period. All came to my Royal, just didn't quite get hooked up. I tied only four of these. One was chewed off and two were taken (line broke). I kept going with the last one. I finally hooked a larger one. 18-inch long and almost 5-lb. But his mouth....... 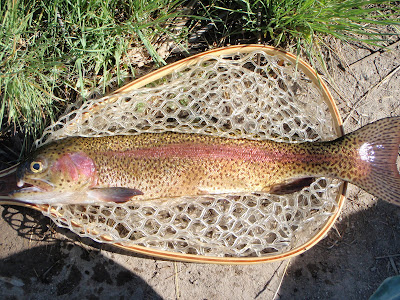 I didn't do anything!! He must have been born like that or experienced an injury (maybe lots of them) through being fished. Anyway, it fought like a whale as he looked. 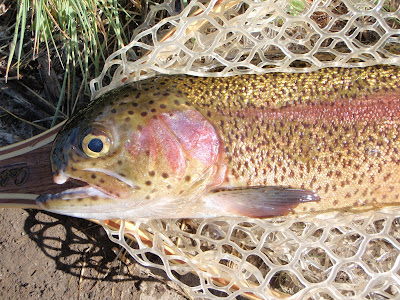 A bit later on, I hooked further larger one. 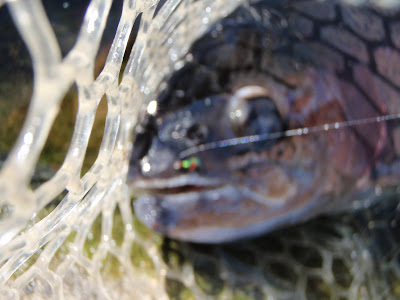 I thought I could make a self-timer and it was worthwhile. Ooops though. 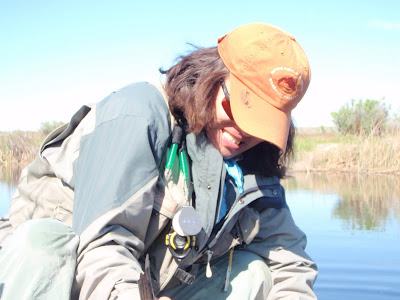 Grip & grin!! It was 21-22 inches long, doesn't matter exactly because it was well over 5-lb. Much better than 21-inch whitefish at Yellowstone River!! 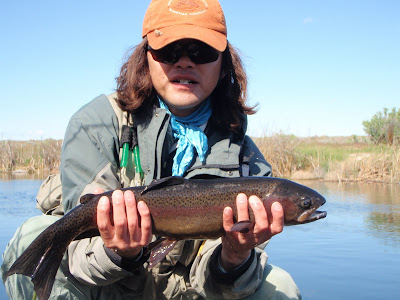 These are all stocked triploids. But they are very stressed due to high fishing pressure. I think they already got to a point not to care our presence at banks.

Also, what I was doing during the morning was nothing technical at all. I was essentially dapping among them. But it has been quite an observation here when things go like this at Rocky Ford. When water is calm without too much wind waves (always clear), I can observe trout's feeding depth, feeding habits & motions, how my flies look under the water, how they sink, just to name a few. Also, in spite of their size and appetite, their takes are very subtle. I can't emphasize how delicate it is. I do use strike indicator/bobber but it even doesn't twitch or stop. Instead I see my bobber to locate where my flies are under the water. Way way way different from when brown trout whack on big stonefly nymphs in Madison River. Then I set the hook as seeing trout take my flies. This is why I think some people refer Rocky Ford as technical and sight-fishing.

Another thing I want to mention is that it's been a while that I see this many trout are feeding aggressively. I am not sure if this is because of the season or I just hit a lucky day. I am guessing it might be related to rainbow's spawning lust and instinct to feed aggressively though triploids themselves don't reproduce.

More to go on in the afternoon.

Thank all trout for your cooperation and patience!!