I could have kept on sight-fishing (a.k.a. dapping) with scud on the way back to my truck for lunch but I just wanted to go back for a grab. I was fishing all morning without sipping coffee.
For lunch today, I did something different from usual (= my meaty-leafy sandwiches). I packed a portion of left-over from my fridge and tried to heat with the stove for some camping taste/feeling.
Then I noticed I forgot match or lighter to ignite the propane stove. I wasn't so upset because at least I could eat it cold to fill my belly. First I hoped other fisherman might also come back to his car for lunch but he didn't. Also I knew several cars, people at hatcheries, were always passing and I could ask them for fire. But I thought a car-lighter for cigarette might work. I started the engine first and heated the car-lighter. It was hot enough but heat didn't cause an ignition. I figured it needed flame. Then I noticed I was holding a grocery add, that was wrapping my frying pan, in my hand. So I burned the add with the car-lighter and got a flame. Using the truck body for less windy position, I made the flame bigger and finally I got an ignition and a hot lunch!! This would probably be the most technical thing I did today \(*_*)/ 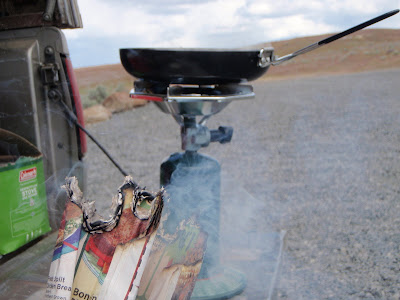 I don't show you my lunch. Let's say casserole, which was originally meant to be soup in my crock-pot. Anyway it is edible and anything tastes better when eaten outdoors!!
=========================================================
I moved to the upper end of the creek. That is an outlet/riffle from the hatchery boundary, which forms a little pond then eventually getting wider below. I consider this riffle is reserved only for me and my soft-hackles. Midges are hatching all day at Rocky Ford but in my experience and observation, afternoon seems stronger than morning. So I went to an "alleged' my spot. Two people, a couple, were fishing around the riffle and pond. OMG...... But they seemed taking turns for lunch and spots and looked unsuccessful. Being a soft-hackle addict (mania), I have to swing!!! Not truly in order to catch fish but for my soft-hackles' sake, I went to the other side from them and swung my midge soft-hackles. Within 5 minutes I hooked and landed 17-incher on Mighty Midget Emerger in front of them. 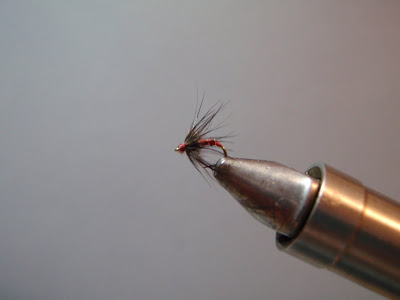 That was quite a show-off. I actually intended to make a killing on this riffle since I was with my 6wt and trout didn't mind 4X and 5X tippet all day. Then I thought about they might be the first-comers, even all the way from Seattle, Tacoma, or Spokane. I should have asked them friendly to see if I can fish around the pond with them. But then again, I have to swing my soft-hackles!! I kinda felt they would not move so I left and walked along the banks downstream. I just made sure my theory and tactics were right.
I ended up with new discovery and experience. As I have mentioned before and will do in the future, I am not a stillwater enthusiast. But for Rocky Ford, I have tied several stillwater patterns. My prejudice had been how boring stripping leech for something is. But today I noticed there were lots of bank cruisers all the time. Some can be visible and sight-fishing target even while stripping my line and flies. I tried an attractor pattern; marabou tail with flash, peacock herl body, and the bead. 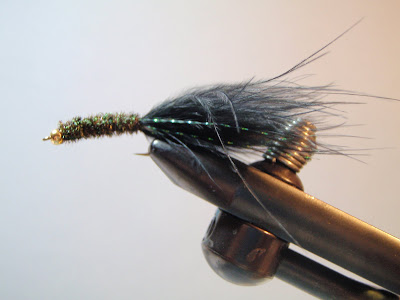 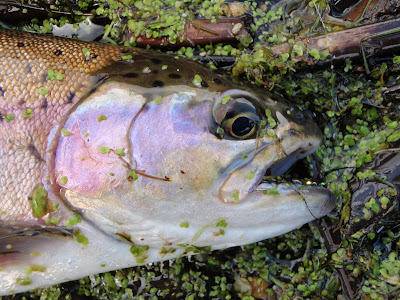 I moved one more fish with this. I could have gone on but I finally started feeling tired. I woke up early and drove a lot. And then these hogs made my arms sore. Muskrat holes all the way made me nervous too.

As I went back, I switched to another new tie for me called, Euro Damsel. Now is the time for damsel nymphs and I like its soft-hackle silhouette. 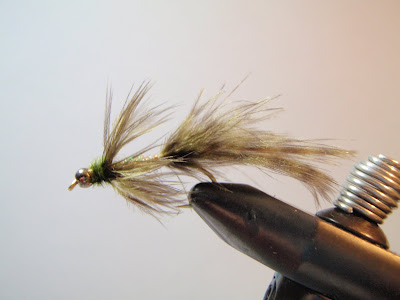 I felt a couple of taps on my line and saw cruising trout's back at the extension of my line. So I set the hook. Another 5-pounder came to my camera!! 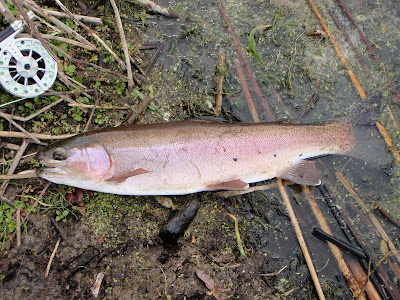 Unfortunate for the couple, I was still in their "hearing" distance. In Rocky Ford, oftentimes it is easy to notice when someone trying to land trout and trout fighting back and splashing water. Furthermore, I was like;
"nice fish!!"
"you are on 2X tippet, pal!!"

I was well satisfied and tired. I stopped at 2:30pm.
Today's experience gave some big confidence to my fly tying and selection. And I have learned that I can fish stillwater as aggressively as at rivers.

I might go back to Rocky Ford in two weeks.
Do any one of you think that I can sell my flies???
Posted by Lefty Angler & Flies at 9:42 PM