Almost all 5pm, I drove into Barns Pool #1. OMG.........there were still too many people. It's been a while that I saw this many people. Even at Cable Car Run.


Well, my objective was to swing my large soft-hackles so I wouldn't regret conducting my obsession. I have known that not many people go down below Barns Pool #1. There are several nice riffles to swing soft-hackles. And I noticed that people were sticking there without making any steps and just catching whitefish on nymphs.

I didn't like the situation but I interpreted as my advantage to swing my soft-hackles. First I tied on a white then later on I tied on a black Soft Hackle Streamer. 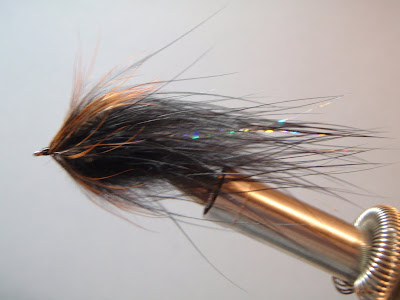 Beneath that I trailed my own Coyote. 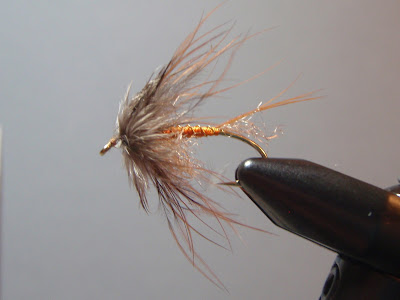 Just about the limit of darkness, I took off my sunglasses and tucked into my wader, as I did last year while swinging my Coyote. Coincidentally, I felt a big tug and trout set the hook itself. It was a nice 18-inch rainbow. But to confess, it was foul-hooked on her pectoral fin. 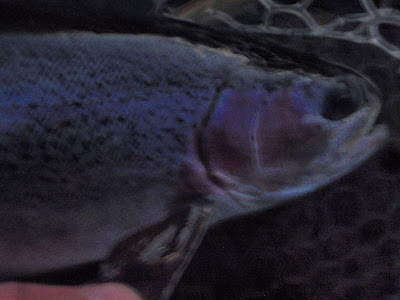 But then again, how lucky I was. She fought very hard because of a foul hook. Another minute or two, she would have been gone by snapping off her own fin. And then again, she was on my own Coyote. Also coincidentally my new scarf was orange as my Coyote. Orange will be my lucky color from now on. 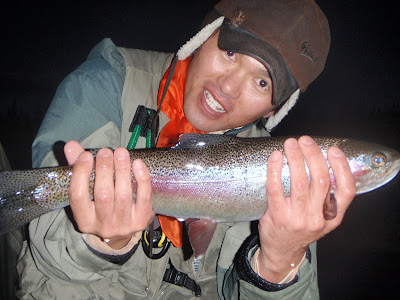 Thank you for the memorable catch of the year. I revived her and she was ready to go as splashing waters to my face. 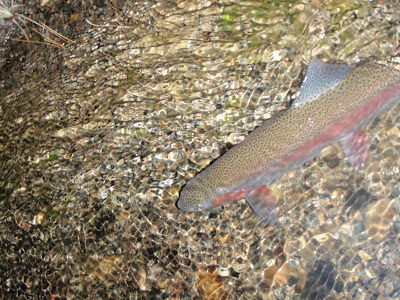 To summarize my fishing in Yellowstone National Park this year, I had my own satisfaction though trout were not as large as last year. Instead, I have caught more numbers and gained my own experience about spots, reading waters, hatches, flies, etc. June trip was a great success. From now on, I have to figure out ways to visit the Park economically from Livingston.

Last but not least, as ending the season, I caught my last trout with my own designed fly while fishing it with my favorite way = swinging large soft-hackles. I was more like relieved and confident rather than just being happy. My flies, theories, and observations worked.

Also, she may even be not the last fish of this year as there are more waters to fish anywhere around Livingston!!!