With great imagination, today I went back to Naches again and fished the same section as the day before yesterday. I just heard the local info that the reservoir way above Naches will be released soon and makes a Class IV or V white water for a month. I wanted to see one more nice cutty.
It was slow. Water seemed a couple of inches higher than two days ago and a bit colder also. I fished the most promising section from both sides but didn't get any bites. I would come back here on my way back to truck on the warmer part of the day so I fished down stream. This is the first time that I fished the bank away from the highway. I had been wondering see if I could cross and only two days ago I finally found a spot to ford the river. The run is full of pocket water and eventually the mix of riffle and deep pools.
I was with my streamer rig but I did mix of stripping and dead-drifting. I caught a little "pocket-water cutty" on Conehead JJ. This one actually tapped my fly three times. 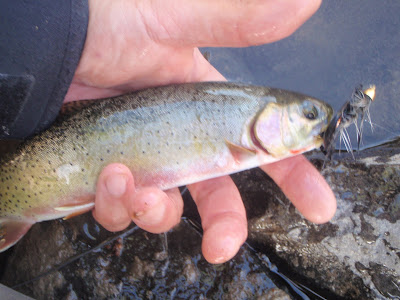 I fished way down. There's a deep pool, called Horseshoe Bend, which can't be fished enough from the highway side but even from this mountain side, nothing happened.
Further down, I finally felt a tug and set the hook. It was like a dead log on the water but moving!! I noticed it was a salmon!!!! It didn't really fight or pull my line into backing but so heavy. I didn't pee in my wader but my legs shook harder and faster than Elvis's. I finally dragged him into the shallow along with some help of worthless trout landing net. 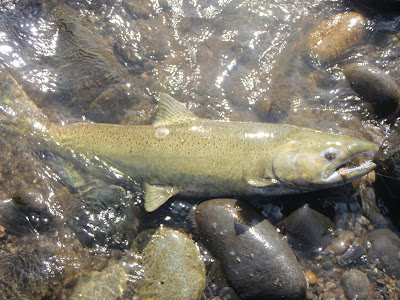 It was a 34-inch male Chinook. I measured the girth with my best and it was 16-inch around. 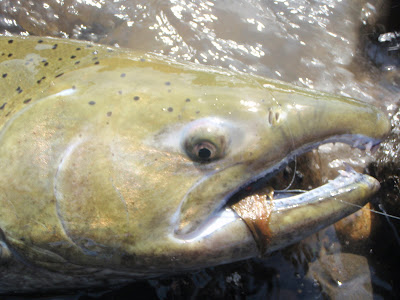 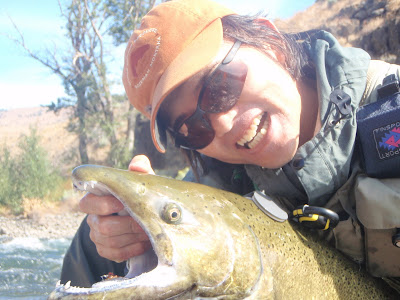 According to "fish weight calculator" (length x girth x girth) / 800, it was estimated 11 to 13-pound. But I believe it was more than that. Maybe I didn't measure the girth right. Anyway it was a heavy baby I ever held. 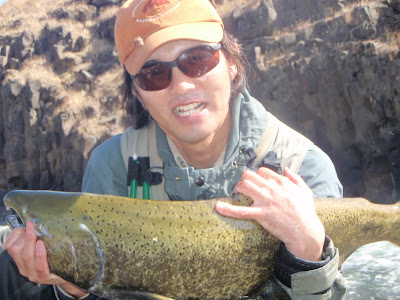 I revived him and let him go. If one had caught this in Yakima or Columbia Rivers, one could have eaten it. But in Naches, salmon/steelhead fishing is not allowed. I watched him till he went back to current. 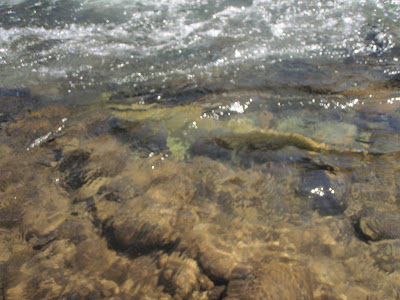 Now some aftermath stories and pictures. Fly that got bitten was Doug's Home Invader again. Tied tan/olive, it imitates baby trout and sculpin. Coincidentally this is tied with a strong salmon/steelhead hook. It really nailed his tongue. 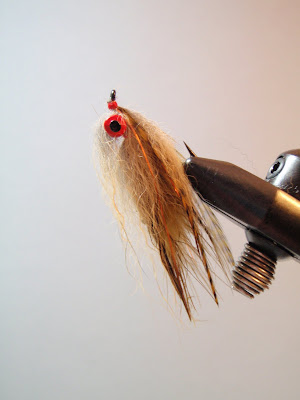 This one will be soon to my wall with a framed picture so I have to tie more for my fall trip to Yellowstone!! 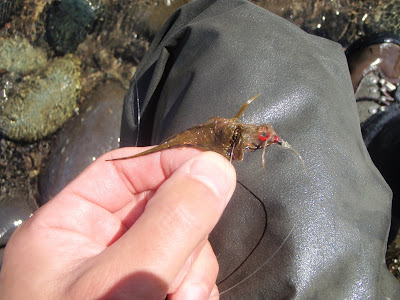 Also I was with Kelly Galloup's rigging. 6wt, Full-sink line, short heavy leader and jerk-strip retrieve. Last night, I somehow made a leader with 15-lb tester. That helped me to land this accidental beast. If I had been fishing with 2X or 3X nymph rig, it would have been gone......
Here's the spot. As you can see, the other side = highway side is a cliff which is impossible to access from that side. I am pointing my rod where a fast & deep current merges to a slower & flatter side where I was standing. I'd like to say my water-reading was great as in trout fishing. 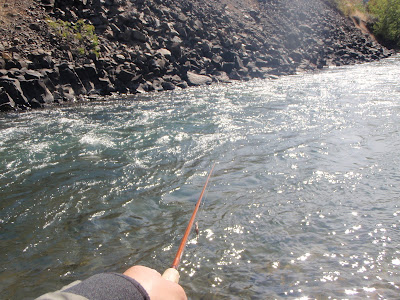 So I'd like to say, it was an accidental catch but not by mistake. I believe I made the accident happen!!!!
This might have been a lucky item too. As I was choosing the chips for my lunch at the gas station in the morning, I picked up this one. Nacho Cheese.......sounded like Naches when shortened....... 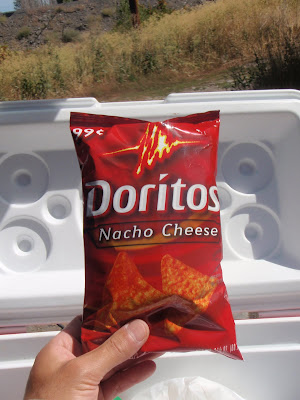 I can't tell if this Chinook was either pre- or post-spawning. If it were post-spawning and ready to die, I shouldn't be proud much. But his fins looked pretty fine, just developing a couple of molds, and he was eager to eat my fly (not snagged or foul-hooked).

And then talking about Naches, there's about a 90-mile of Yakima River from mighty Columbia in between. And there are lots of anglers and dams all the way from the coast. I was so impressed with this happening. I sat on the rock for a while and felt done for the day.

It was more than a practice for streamer fishing to catch huge brown trout in Montana in the fall. I will take 18- and 19-inchers, you know!!
I wonder if I am using up my fishing luck for this year...... No I don't think so.
I made the accident happen!!
Posted by Lefty Angler & Flies at 8:08 PM