I just come back from Rocky Ford Creek in Ephrata, WA. Two hours one way. I left my house about at 5:20am and you know I have to cook and eat breakfast so guess what time I woke up at....
Today was the debut of my brandnew 5-wt. The biggest objective was nothing but "catch nice trout", period. I just couldn't go out to somewhere, say Yakima River, fish some with dry-flies, may or may not catch fish, and say "I felt this and that about my new rig". I had to feel trout also. The bigger, the better. It had to be Rocky Ford. But flies mostly used in Rocky Ford are scuds and something in the bottom. My 5-wt was meant to be dry-fly fishing in big rivers, wasn't it? Yes and I won't put bobbers or large streamers on my 5-wt that I swear. So it does sound like I'm a hypocrite but, to make a solution, I rigged up a dry/nymph dropper. I chose a foam hopper pattern as an indicator and then tied a scud on 2 feet below and eventually I added a mini San Juan Worm below the scud.
It was slow......though I held the best and easiest spot to get me started and while an angler on the other side was making a killing on the same stretch of his side. I was casting or even dapping to the right feeding lane but didn't get any strikes. I figured it was the "depth" I was fishing. Especially fishing with dry/nymphs dropper, it seemed to be a bit hard to get to the bottom. I simply added split shots till it seemed OK. Trout started to look at my flies. I hooked, lost, foul-hooked, etc and finally landed one.
The first trout on my brandnew 5-wt was this about 20-inch & 5-lb fat triploid rainbow. Not bad, huh?? 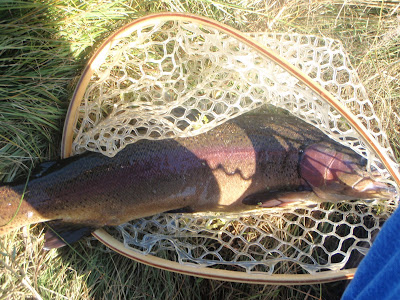 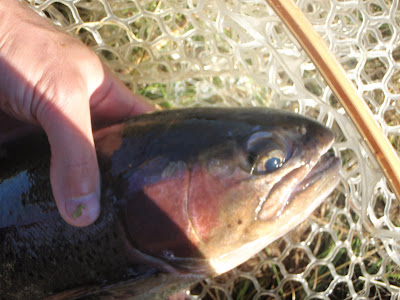 I kept going. An angler on the other side hooked and landed twice more than I did but I was positive I was catching only big ones!!! Since both scud and worm worked equally, I really didn't keep track on what on which. Again, the "depth" was the keyword for the day. This one was so massive yet on tiny worm!!!! 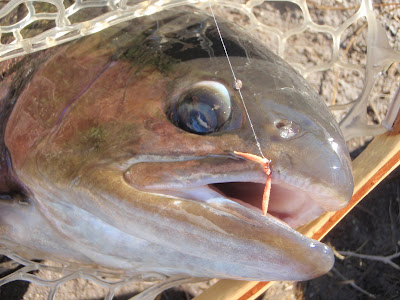 Probably 24 or 25-inch long and potentially 7 to 9-lb because it was heavier than a 5-lb beef-chub at grocery stores. See my rod was not flat on the ground so it is hard to guess how long. 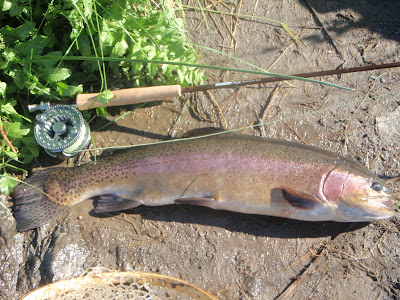 This one was a bit smaller instead I got a better picture with my rod laid flat on the ground. Positively guessed 23-inch?? 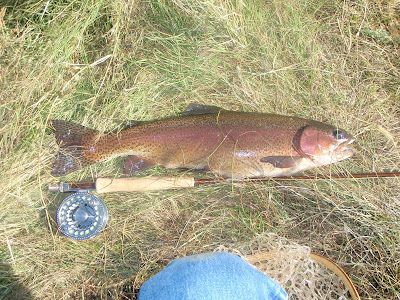 I caught several of these eating machines. All of them were around 20-inch & 5-lb class. By the time I stopped and headed back to my truck for lunch, my Mini San Juan Worm was opened up by these weights!! 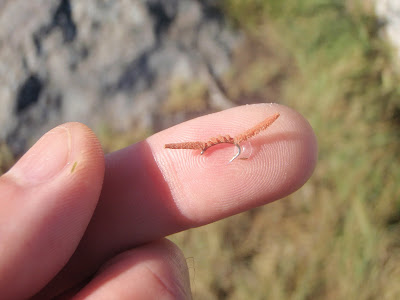 Very good debut!! My brandnew 5-wt can handle these beast as well as my 6-wt. Also though I was fishing the bottom of the creek, all the actions were so visible in this clear water. It may not be truly a technical fishing but quite an observation for sure.

Afternoon was the time for another objection = dry-fly fishing.