It was only 5 days ago, or already 5 days ago, from the accidental catch of Chinook. I still can't let it go off from my mind. This happens to me when I have lost trout. Sometimes, I just feel something really big and then either my fly come off or line gets broken. Also oftentimes, I see nice trout come up or chase my flies but don't get hooked or I would hook them and see their sizes and then gone somehow before netting or taking pictures........ What if?? They could have been..... This kind of feeling always makes me go back to the rivers.

But this time, the Chinook is lingering in my head in a different way. First of all, I was getting tired of people around here asking me if I fish for salmon/steelhead. Same thing happens when I go fishing in Montana and tell people at shops and anglers that I encounter that I am visiting from WA State. I've been answering "no..... I like trout fishing and salmon/steelhead is a different game with different gears, etc etc." Now I can say "Hey I landed 34-inch & 15- maybe 20-lb Chinook on my 6wt. It's the "KING" of the river, you know....."

Well, just bragging, here is the serious part. To be honest, I was more scared than excited of the sight of this massive fish. My legs got really shakey but my abdomen got tightened to keep myself balanced. Then the brain-works. While I was really afraid of losing it by line-breaking, I was trying to figure out how to get him in. In this case, I looked for somewhere shallow to drag in. Not to mention the adrenalin rash. His tooth gave several scars on my fingers. This one is very sharp. So this "king of the river" really scared my body and mind. 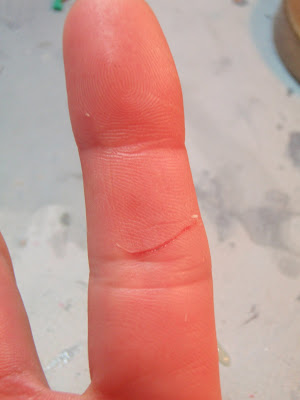 After a few thoughts for pictures and titles, I finally printed one out, framed it, and hanged it on the wall. I wonder which one is more toothy and more beast like?? 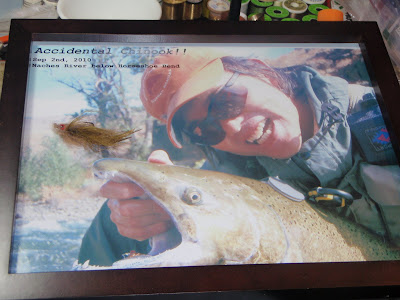 I always save memorable flies after I land memorable trout and keep them for frames. Believe or not, Doug's Home Invader really smelled the sea = saltwater of Pacific Ocean. Fight would have been 3 to 5 minutes and it got stuck in his mouth for 2 minutes, give or take, for the first couple of pictures and till I recover with my forceps. Now I've got a memory in my nose too. 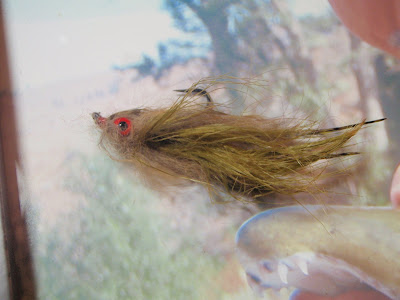 Another photo I was thinking to print out and/or make a combo with one above was this one. I really couldn't grab or grip it. Along with his strength to get away, I really had to hoist. I stepped backward a bit further from my camera but still it didn't capture his entire body. 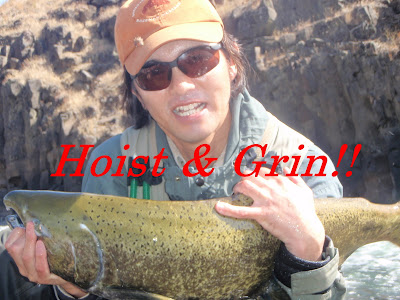 Another biggest reason why I am sentimental is probably because I have just bought and read this book. It's written by a fish biologist in my area. It's not really about fly-fishing or catching fish as you can see. 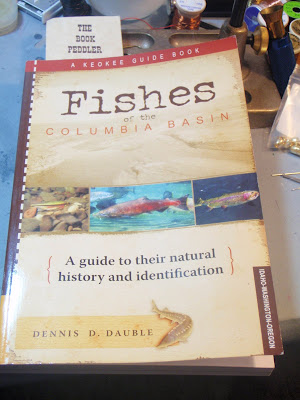 Salmon and steelhead runs were legendary in Pacific Northwest. This book tells the historical numbers of runs and harvests. Harvesting was really important for Native American tribes all along the Columbia Basin too.

Now the Columbia is with all kinds of dams and infamous Hanford Nuclear Plant. The book says nowadays 80% of salmon/steelhead coming back to the Columbia and its tributaries are from hatcheries. I believe my catch was the hatchery one; adipose fin was clipped as you can see on my "Hoist" pic.

Following the regulation and due to the respect for mother nature, I let him go. But did you know that we have to kill certain amounts of hatchery salmon/steelhead every now and then in order to sustain population of wild ones for whatever left?? How contradicting it is and how hypocrite we are??

I don't blame people who want to catch and eat salmon and steelhead in Columbia and Yakima Rivers by any methods. Just follow the regulation and pack in-&-out your trash, folks. Probably nobody really cares if I had killed and eaten this Chinook. Nobody saw me anyway.

But my imagination spread out. This Chinook swam up Columbia from Pacific Ocean to Portland first. Then 200 miles from Portland to Tri-Cities where Yakima meets Columbia. Then he must have swum 90 miles upstream to the city of Yakima, passing right by my house. Another 20 miles, that's where I saw him. We can drive 300 miles in 5 hours give or take but how many days and weeks had he spent?

It was just a catch of my fishing life but it conjured up lots of thoughts in my mind........

I also have got tired of people asking me if I kill and eat trout. No sir and no mam, I am not interested in. Fly-fishing is the sport of passion. Please don't ask me any more.

I might sound like a big hypocrite but I love to eat fish at sushi restaurants, cook cioppino, and eat cans of clam chowder soups!! But those fish/seafood are legally harvested and raised as naturally as possible and I pay the price. That sounds fair to me. But killing and gutting my catch.......yuck, I can't do that.