I am officially bored. I'm surrounded by cows and no time for fishing. Then here in eastern WA, we are having triple digits if not upper 90s. That shuts down fishing anyway even if I had a time or two. Trying to keep myself busy at my bench, I worked to fill summer box with my brandnew Blue Ribbon Flies 30th Anniversary box. 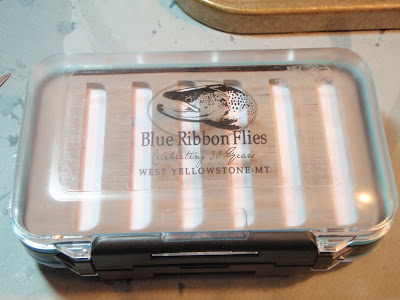 But it took me only a couple of nights to list and tie summer essentials............
Trying to be positive one more time, since I've got a brandnew computer, I started to work on my pictures. I cropped and resized most of all of my flies.
All along these, I relapsed in less than a month.......... I need to fish Madison right now......

Now I feel melancholy rather than day-dreaming. As of typing this, trout are rising and feeding subsurface for Epeorus duns/emergers/spinners and Hydropsyche caddis cripples/adults.

As I worked on this picture of Epeorus Rusty Spinner, 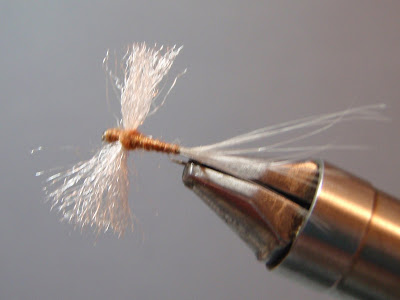 An idea hit me like a thunder along with my previous experience. I came up with a soft-hackle, my obsession that I don't have to emphasize any more. I meant it to be a drowned rusty spinner. Tied in a "Flymph" style, yet I kept the body thin, not as shaggy as Flymph. This can be fished as dry as a regular spinner on surface then swing as drowned just subsurface. 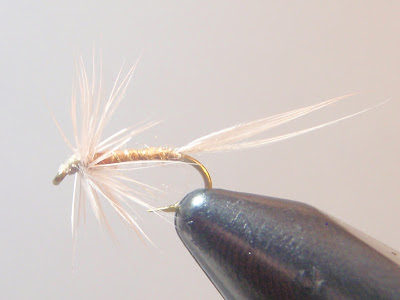 Need a proof? Two summers ago, I swung a Flymph right under the famous $3 Bridge about at 10pm before I went back to my motel room. This 18-incher took it on swing. This was just below the parking lot which would be one of noisiest for us and trout. Also, my fly-tying was way immature than now yet my soft-hackles were accepted. 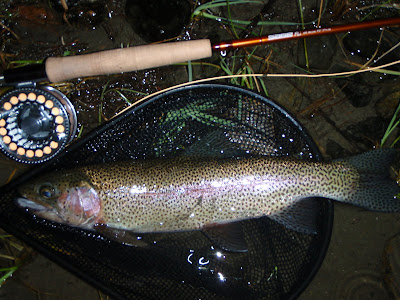 This was actually my birthday two years ago.
This summer I spend my birthday with cows............
I've got all the reason to fish hard in the fall.
Yet till then, I have to face this melancholy feelings and Madison-withdraw-procedure.
That sounds torture to me...............
Posted by Lefty Angler & Flies at 10:27 PM