Today, Graham and I hit the 'Stone again. We floated Hwy89 Bridge to Springdale = almost 14 river miles. Wind pushed us down but not scary level. It was just breeze compared to real winds in Livingston. But it was sunny and up to 80s!!??
Although Graham had some actions on hopper, I tried nymphs with a bobber again. I caught one whitefish but after that it was boring and even hard to nymph in this stretch because structures (depth, current, etc) change so often. I switched into hoppers too. It was a decent Cutbow. It was as round as spring-creek trout. 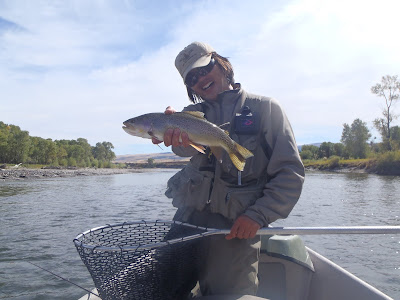 After this, hopper fishing seemed totally dead....... Indeed nothing seemed working. We were losing our confidence but my streamers didn't. I bet on that streamers can wake up lazy trout. That would be the only way to get through. I worked with great concentration and something hit it!! HUGE!! I was positive it would be 18-inch, give or take. Indeed it was........another 18-INCH WHITEFISH 2 DAYS IN A ROW!! See how proud I look like!! 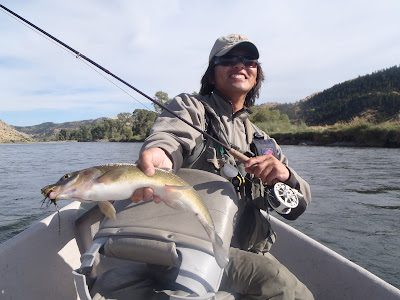 Graham caught a nice brown on a streamer too. It leaped several times till I net it. Actually I haven't seen this kind brown over a month 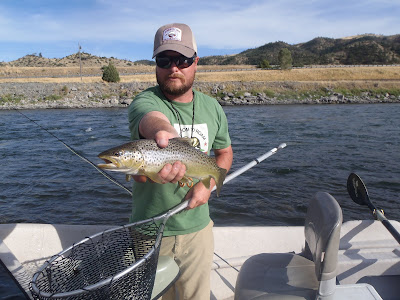 It was just a tough day but my mission was accomplished. I try to catch as many whitefish as I can for now so I don't have to deal with them later. Then I defended my title as WHITEFISH KING. It was squeaking when I was trying to get my streamer back. "Que~~Que~~" I don't think I can sleep tonight with that creepy sounds..........
Posted by Lefty Angler & Flies at 9:32 PM